Tribeca is powered by a 3.0-litre boxer engine; it has a top speed of 121mph and claims to get a combined fuel figure of 23.0mpg but, as we all know, the driver never gets near these figures. And 23mpg is dire even if it could be achieved. Urban use goes down to 16.6mpg officially.

Now, I can imagine people reading this and declaring that, if you can afford £32k for a car, then you can afford the fuel to run it. But I disagree. I really like the Tribeca, for all its controversial ‘distinctive’ styling; the interior is fantastic; it’s a very comfortable drive, although not particularly fast; but the lack of diesel engine makes it a no-goer.

You have to remember to pitch it against the opposition, and the price tag pitches it against some serious competition. Like for like, Nissan’s Murano, for example, starts at £29,995 for a 3.5-litre V6 model, which does the same 23.0mpg on a combined cycle – and is generally classed at being more appealing aesthetically. But you can get a 3.0-litre diesel BMW X3 for £32,545, which does 32.8mpg combined with a top speed of 130mph.

But back to Tribeca.

It offers a seven-seat option, which is something that does make it stand out from the opposition. The whole thing has a quality feel to it, including the interior, which is somewhere that Subaru often lets itself down. And it has a great presence when out and about, turning heads wherever it goes. 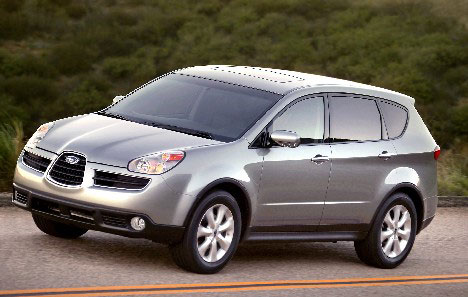 On the road it absorbs lumps and bumps, making even the twistiest back roads a comfortable experience. The seats are beautiful, and it is very much like sitting in your favourite old armchair. The whole experience is about comfort, not kicks.

Subaru does well in customer satisfaction surveys, which is a useful selling tool. Plus, with the carmaker only planning on 1,000 units per year, it also has the wonderful ‘exclusivity’ tag, which will also keep residuals strong.

When Subaru finally catches up with the real world and puts a diesel in the Tribeca, it will be a good buy.