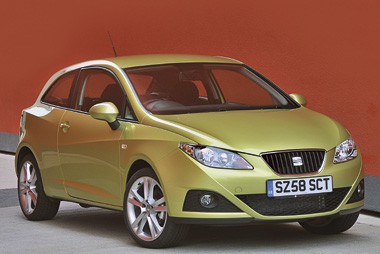 The last two generations of Seat’s Ibiza hatchback have secured it a following among younger drivers.

The average age of buyers of its three-door variant is 34 years, according to the carmaker.

That is expected to continue with the arrival of the Ibiza SC, short for SportCoupé.

With the new generation Ibiza, Seat has decided to make a clear distinction between the sportier-styled three-door and more family-friendly five-door.

Previously, Seat has oddly included the five-door bodyshell on the options list of the Ibiza.

As a result, it fears Ibiza may have lost sales as prospects reject the car in the belief it was three-door only. Separate promotional material will overcome this.

Like the five-door, the SC is offered in three petrol engine variants, with the mid-range 1.4-litre taking the most sales.

Diesels and higher performance FR and Cupra versions will come next year.

Unlike the five-door’s Reference, Style and Sport trim levels, SCs will be designated S, S A/C (with air-con), SE and Sport.

Seat is coy about sales targets, but says it will be happy to sustain last year’s three-door volumes of around 5,000 units.

It expects the five-door to fuel growth.

SC has been priced carefully, nevertheless. The £9,999 SC 1.4-litre SE we drove is certainly a match for a Vauxhall Corsa or Fiat Grande Punto.

It felt safe and steady, and its standard equipment covers most of the bases for the younger motorist (CD with MP3 aux-in, air-con, coming home headlight function and cruise control).