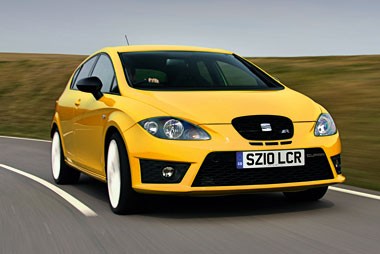 Seat hopes its new Cupra R scorcher, the most powerful production Seat ever sold, will have a halo effect and boost consumer interest in the whole Leon range.

Going by its initial press reception, dealers should be well placed to capture the 300 to 500 people Seat UK expects to buy this car.

The opportunity for the 118-strong network, therefore, will be to convert those ‘just looking’ visitors into whichever lesser Leon best suits their circumstances.

The Cupra R certainly delivers the performance that will excite any car enthusiast. Its heart is a 261bhp 2.0-litre turbocharged unit, the same used in VW’s Scirocco R, that hurtles the car from standstill to 62mph in 6.2secs. That’s acceleration which isn’t far shy of a Lotus Elise.

Importantly, all its sporting enhancements don’t detract from this car’s usability. Like any Leon, it can still serve as the main car for small families. Its cabin is pretty dark, but it comfortably seats four occupants and the 341-litre boot is adequate for their belongings.

With such extensive standard kit, the upsell opportunities are relatively limited, but include a technology pack, sunroof and hill hold control.

The Leon Cupra R is more than just outright pace.

It’s sharp and agile in corners, plus has an impressively forgiving ride for a performance hatch. It’s a great all-rounder that’s as refined as it is quick.

And while it’s the most expensive model in the Leon range, when you compare it to other hot hatches with this much power it looks good value.

The Cupra R is not a new handling or performance benchmark, but even with such an array of similar-ish hot hatches around it makes more sense than most.