Lexus will refresh its IS compact executive saloon this autumn with this lightly revised version.

Don’t expect any huge shocks, however – this 2009 model year facelift falls firmly into the blink-and-you’ll-miss-it category.

Light disguising around the new IS’s nose masks the majority of the changes, which include new grille and lamp detailing to spruce up its visage.

Rather easier to spot will be new indicator repeaters, which are relocated up to the door mirror casings (not visible on this prototype).

Lexus will also revise the saloon’s engines, although the same line-up will continue.

There won’t be a hybrid version, however.

That makes the IS the only Lexus model range without a petrol-electric offering.

The GS, LS and RX models all have a saintly eco hybrid choice.

The IS compact exec is the mainstay of Lexus’s range in the UK, selling around 8,000 units a year.

Expect prices for the facelifted model to rise slightly from today’s range of £24,000 to £51,000 for the sledgehammer IS-F, a high-performance hot-rod rival to the BMW M3 and Mercedes-Benz C63 AMG.

Although not officially confirmed yet, we hear that a folding hard-top CC version of the IS is being con-sidered. We are unlikely to see that this autumn, however. 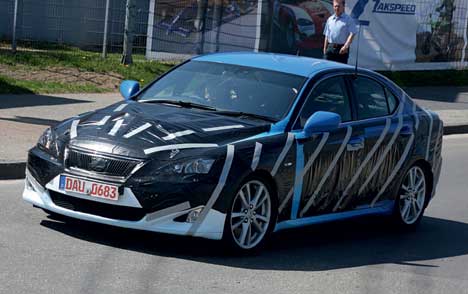