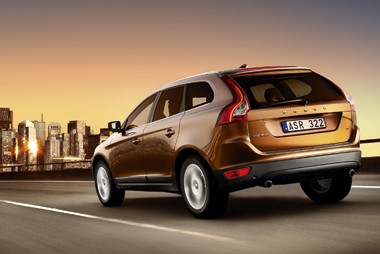 It seems there isn’t a niche that every manufacturer wants to fill these days. Take Volvo, for instance.

Traditionally known for its cavernous estates, it currently boasts a convertible, a two-door coupé hatchback and a large 4x4 among its line-up. And now it’s tackling the compact off-roader market with the XC60.

Of course it’s not only Volvo that has seen the appeal of a market which grew 24% last year. The Volkswagen Tiguan and Ford Kuga have been launched this year and the Audi Q5 is due in January.

And they all have one thing in common: they’re labelled as ‘crossovers’ – a blend of the toughness and versatility of an off-roader and the on-road agility of a normal hatchback. Judging by the looks, Volvo has ticked this box.

The influence of the XC90 is obvious but the newcomer is far more svelte and athletic, lacking the sheer bulk of its larger cousin. However, this is not a case of form over function.

The XC60 has an expansive boot, is spacious inside and has good rear passenger space, complete with stadium seating.

The cabin itself is wonderfully Scandanavian, with a modern and fresh feel – complete with the Volvo trademark floating centre console. The seats are also very comfortable and therefore great for long-distance travel.

The XC60 is the safest car Volvo has made and all models come with a new system called City Safety, as standard.

This technology can determine when a collision is likely at low speeds and apply the brakes automatically.

But is it as good to drive as it looks? Well, it’s certainly comfortable and rides superbly – the refined feel further emphasised by a reassuring lack of wind or road noise at speed.

However, while traction out of corners is excellent thanks to the all-wheel drive system, the steering doesn’t have enough feel.

It also lacks accuracy and requires more lock into bends than you’d expect of a car designed to be sporty to drive.

That said, the Volvo does feel safe and solid from behind the wheel thanks to well-weighted controls and responsive brakes.
Volvo has realistic targets of 5,000 registrations in 2009, with retail sales making up 60% of the total.