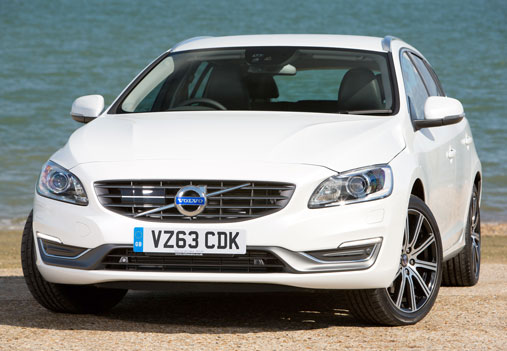 Volvo has suffered recently in the UK. It has not had the same breadth of models and efficient engines that have allowed its German rivals to speed away with the executive car market.

The first turbodiesel engine from its new 2.0-litre, four-cylinder Drive-E powertrain family is tasked with leading this charge. As a signal of this unit’s potential, how does 178bhp and CO2 emissions as low as 99g/km sound? To the company car user, conscious of the low operating costs such emissions bring, that will sound very attractive. Buyers will currently pay nothing for VED nor first registration and its Benefit In Kind taxation rate is six percentage points lower than a comparable Audi A4 Avant.

Initially, the new S60, V60, XC60 FWD, V70, XC70 FWD and S80 cars will be available with the new D4 and a six-speed manual transmission as standard. An optional eight-speed automatic gearbox pushes emissions up to 109g/km.

We tested the engine in a manual V60 SE Lux Nav around the Derbyshire countryside and found it packs plenty of punch and revs smoothly. Fuel economy for the 90-minute drive hovered just above 50mpg, some way from the official EU test figures, but pretty good real-life performance.

Volvo Car UK said the new D4 is in such demand in the UK that current lead times are stretching to about four months, double that of every other engine available within the range.

The whole Drive-E engine range consists of two four-cylinder engines: one common rail diesel and one direct-injected petrol.  Several levels of turbocharging open up the flexibility to cover the whole requirements of Volvo cars, from fuel-efficient derivatives through to high-power variants. In the future, Drive-E diesels will range from 118bhp to 227bhp while petrol versions will start at 138bhp and go all the way up to 300+bhp.

Much of the new engine’s gains in efficiency and performance come from traditional measures, such as weight-saving and start-stop, as well as clever new advances. The new engine monitors pressure feedback from each fuel injector rather than using a single sensor in the common rail. Each injector monitors its own injection pressure to optimise fuel injection in each of the four cylinders.

It is expected that the new Drive-E engines will be fully implemented in all Volvo cars by the end of 2015.

What’s been said about the VOLVO D4 V60

WHAT CAR?
For company car users, the new S60 D4 is as cheap as premium saloons get. The low starting price should also tempt private buyers – it’s thousands cheaper than most of its rivals, and should also hold its value reasonably well.

AUTOCAR
Even away from those appealing running costs, there’s much to like. The V60 continues to cut its own path and this punchy new engine does much to widen the appeal of the class’s non-conformist.

Volvo is in a position where it can become the new alternative to German executive arrogance.