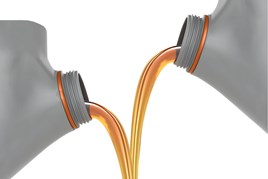 For franchised workshops the choice of oil supplier, and the cost negotiated, can have a big impact on profitability.

Alongside labour hours, oil is the highest-margin item on a customer’s service invoice, so it’s important that workshops choose the right supplier and negotiate the right deal.

The weakened sterling/euro and sterling/dollar exchange rates seen since the EU Referendum have brought price rises in parts of the aftermarket lubricants market. These follow already rising costs related to the disposal of waste oil. Phil Evans, commercial director at fuel manufacturing and waste oil company RE:Group, said the market shift means workshops may now have to pay for disposing of their oil rather than make an income from it, due to the low value of the recovered product.

The combination of the two means it could be an opportunity for dealer groups to reconsider their suppliers – where they have the freedom from their manufacturer brand to do so.

Manufacturer approvals remain powerful – the pressure for lower emissions means carmakers are required to work ever closer with their chosen lubricants suppliers when developing engines. That relationship is expected to continue through aftersales once those engines are in the market, to ensure they maintain optimum efficiency. However, it means impressing on the customer that using the right lubricant can reduce their fuel bills in the long run.

A large number of car manufacturers have relationships and technical partnerships with such oil suppliers. Jaguar, for example, has been in partnership with Castrol for almost 30 years, and Ford has been working with the company for a century. Its other partners include Audi, Land Rover, Volkswagen and Volvo.

“Our main focus is maintaining that direct line between our sales guys, development guys and the dealership” Neil Grieve, UK manager, Q8 Oils

Such partnerships give credibility and distinction to oil brands in a market where consumers, except for car enthusiasts, show little interest in which oil is put into their car’s engine. The growth in provision of free or discounted service plans means their interest in the cost of the oil used has also diminished. Their faith is in the franchised dealer to use the right product that will maintain the optimum performance of their car.

So for the oil suppliers, much of the focus is on the custom they can win from dealer groups. To win business with dealers and manufacturers, they have to broaden their businesses  with additional consumer data and performance consultancy services, which they hope will help their clients grow their business and ultimately benefit them by ordering more oil.

They are also providing training for service advisers, to encourage them to explain the benefits in terms of how much money the motorist will save as a result of choosing the right oil, and to sell a top-up bottle of oil for use in between services.

Chris Wall, marketing manager at Total Lubricants, said that with the introduction of AdBlue, required by many Euro6 diesel engines, Total will look to simplify the life of a dealer by providing a consolidated package, alongside coolants and antifreezes.

It is already providing marketing support to dealers across digital, point of sale and events, including showroom promotions aimed at driving footfall – recently it loaned a Red Bull F1 racing car to a regional group.

“We recently worked with one large franchised dealer who operates a business leasing service and were able to supply them with fleets’ business contacts running more than 18,000 LCV vehicles and 6,000+ cars” Chris Wall, marketing manager, Total Lubricants

This year, Total launched a new fleet data service to assist dealers in targeting new sales and workshop opportunities within this growing sector.

“We recently worked with one large franchised dealer who operates a business leasing service and were able to supply them with fleets’ business contacts running more than 18,000 LCV vehicles and 6,000+ cars. As more and more OEMs talk about their approach to business and fleet contracts this is an ever more vital area to focus in on.”

The personal touch is seen as a strength at Q8 Oils, which sells about 4 million litres of lubricants to franchised dealers annually and has a 10-strong regional sales team and five field technical experts who advise their clients directly on products, storage, disposal and equipment.

“Our main focus is maintaining that direct line between our sales guys, development guys and the dealership,” said UK manager Neil Grieve. He added that building on its 13 manufacturer-specific lubricants with a further five in 2017 is another priority, as Q8’s recent research of dealers showed manufacturer approvals and price were key.

Castrol recently revealed a new oil change product containing a unit with new oil and filter that it said will cut the time of an oil change to 90 seconds.

Castrol said the Nexcel speeds up oil changes and creates less waste and mess. Oil cells are collected after use, avoiding wastage of used oil. This oil can then be re-refined back into high-quality lubricants.

A spokesman for Castrol said: “We aim to ensure Nexcel compares favourably to the cost of oil, filter and labour in a conventional oil change. It’ll be five to 10 years before Nexcel is on mainstream road cars and exact costs aren’t known that far into the future.”

Engine designs must be adapted to use the Nexcel system. Castrol is expecting manufacturers to launch drivetrains with Nexcel compatibility in the next five years.

Paul Waterman, Castrol chief executive, said: “We believe this is the biggest leap forward in oil change technology in the history of the combustion engine.”

Castrol said the Nexcel system has been tested on a range of engines from small city cars to high-powered racing engines, and in extremes of conditions.

Like Q8, Total Lubricants also offers dealers services such as oil disposal and database cleansing – to help dealers make sure they have up-to-date customer details and are targeting the right prospective aftersales customers. The company also offers ‘Total Hub’ to its clients, which aims to help dealerships increase their aftersales business and car sales.

The hub was created three years ago, and offers a range of information and tools on a range of subjects, from waste disposal to advice on the installation of equipment.

She said emissions and the efforts made by manufacturers to reduce them are key issues affecting the UK car lubricants market. The European Commission has set strict targets that by 2021 new cars should only emit 95g/km of CO2. Using lower viscosity oils is one way of achieving this, but traditional base oils have when it comes to blending with lower viscosity engine oils, so Shell developed its PurePlus Technology. This uses natural gas to make the base oil, which Shell claims helps the end lubricant to perform better and will deliver even lower viscosity oils for engines of the future.

“Crude oil won’t be around forever. The development of Shell Helix Ultra with PurePlus technology, made from natural gas, is paving the way for the industry – ensuring longevity of supply,” she said.