Dubai: the AM way 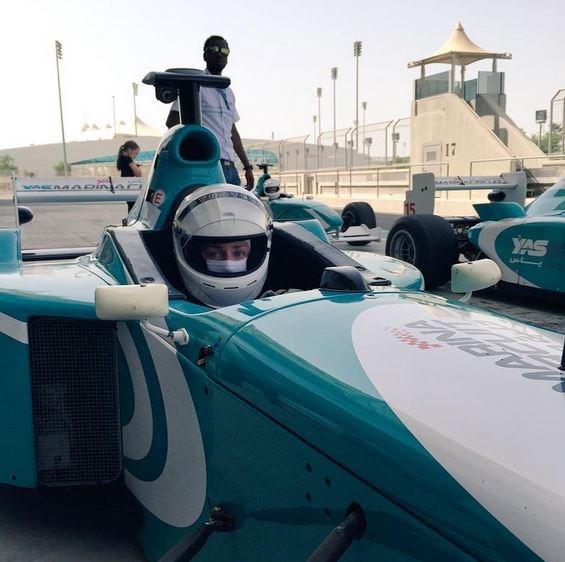 We all work hard (don’t we?) and the prospect of a holiday is what makes the time and effort we put into doing a good job, worthwhile.

I took a trip to Dubai last week. It was something I’d saved long and hard for, and was very much looking forward to. But, even in Dubai – a seven hour flight away - I can’t escape my job, and to be quite honest, I never really want to.

Being an avid motorsport fan, I thought I’d see if it’d be possible to visit the Abu Dhabi Yas Marina Circuit, while I was out there. I was expecting a tour of some description, but quickly found that they have a whole schedule of experiences available to book.

My choice: driving a single-seater Formula 3000 on the track, which is priced from 1600AED (around £280). And what an experience it was. To drive on the infamous Abu Dhabi race track was one thing, never mind in a Formula 3000 – I’d have been happy if it was in a VW Up.

Driving a single-seater is something I’d never done before so, naturally, I was nervous.

I was taken to a room to get properly kitted out. I’d even bought new trainers while out there to make sure I had sensible footwear, but the organisers provided everything I needed.

I got in my suit and, bearing in mind the heat was around 40 degrees at the time, I was already sweltering and hadn’t even got in the car.

I put on my boots (genuinely feeling like Lewis Hamilton right about now) and went into a professional briefing of what you can and can’t do.

There were two groups of people booked in for the experience. I was joined in my group by two men.

We were asked at the beginning who we thought would be fast. I kept silent, but the two lads said they would be quick – so the organisers placed me at the back.

I put on my balaclava and my helmet and I was ready to go. Nerves were really kicking in now – if you’ve watched the Top Gear special of Richard Hammond driving an F1 car – I was expecting to epically fail, or at the very least, stall.

Nine was my car’s number.

I sat in and was asked to shuffle down a fair bit, being 5ft 6, but I was still comfortable. They strapped me in with a six-point harness and attached my steering wheel – all I had to do was push the clutch and press the start button…

I’m sure you’re probably expecting me to write that I stalled, but, nope. I pulled off smoothly and we took off onto the track. I’ve done a few track experiences in the past – one in particular being a day with Nissan driver Wolfgang Reip, who gave me pointers on my lines and where to brake and accelerate.

I have never concentrated so much in my life.

It wasn’t just driving, it was more than that. I was so focussed on braking sharply before the corner, and finding that point where I could use my heavy right foot to take me out of it in the fastest possible way.

Our second lap came and we were pulled into the pits. Driver number one was taken out of our group for being too slow and, not to blow any trumpet but, holding the rest of us up.

Off we go (no stall) and it happened again: the only female on the track was just too fast for the boys, and driver number two was taken out and placed into another group.

It was now just me and the instructor.

This was actually unreal.

Me behind a track pro, and not doing too badly at keeping up with him either.

Here’s a video vine of us passing the pits.

20 minutes of driving later and I was exhausted. We pulled in to end my experience. I got out the car to fully realise and take in what I had just done.

I can whole-heartedly say it was the best day of my life; an experience I’ll never forget.

I had driven on a track where my idols – Sebastian Vettel and Fernando Alonso – have driven.

I had respect for them before, but now I really ‘get it’.

The job of a race driver is both exhausting and mentally challenging – so much so that you have no time to look around, take in your surroundings, or analyse how you feel.

But, the intense elation you get afterwards, pride in what you’ve achieved, playing it back in your mind; how you took the corners, almost losing it in one corner and pulling it back safely, is beyond anything I’ve ever felt.

So, that was my drive of the Abu Dhabi circuit. I was extremely impressed with the whole experience, the instructors were professional, they knew what they were doing, and were patient with those who were perhaps a little nervous. The whole thing was well organised and made for a very eventful day.

The venue has been working hard to implement a new structure to its experiences, to ensure a wider variety and more availability. It plans to have all experiences running alongside each other, three days a week, from September.

Booking is recommended on the more popular experiences like the Yas Formula 3000 and Aston Martin GT4, but there’s plenty you can also just turn up and do.

You need to be aged 18 or over and possess a full driving licence for most of the experiences, but there is also one for juniors (aged 11-17), which provides an introduction to driving, in a structured and safe environment.

For more information on the experiences available or to make a booking visit: http://www.yasmarinacircuit.com/