How to motivate sales teams on paint protection 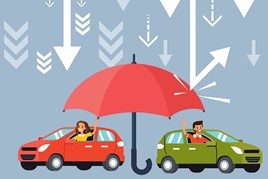 Cash is obviously a clear motivator for any sales executive working to hit a target, but there are other factors that play an important part in boosting penetration for add-on products.

Chris Benham, Supagard key account manager, said the starting point for introducing any product to a customer, including something like paint protection, has to be belief in what it offers. Without that product buy-in “it’s a non starter”.

Benham said: “There has to be advocacy from the sales team around the product and you’ll only get that through introducing it in the right way.”

Supagard does on site demonstrations for the sales and valeting team to see how the product is applied. Sales teams can even have a go at applying the product themselves.

Benham explained that sales teams need to be confident that when they’re selling a product, there is also trust that the valeting team will be applying it correctly to get a consistent end result.

Benham said: “Sales people want to know they’re not going to have any issues with customers coming back to them in the weeks or months after a sale.”

Supagard shares warranty claim rates (which Benham says are minimal) with dealers before the onboarding process as another way to boost confidence.

Lance Boseley, Jewelultra marketing manager, said having the proper training and knowledge will be a big help to sales executives.

He said that a slip down the sales rankings may be because the executives are not talking about the product as confidently as they might because they are worried they won’t be able to answer questions.

Jewelultra recently appointed a new training manager to oversee that area of the business for the first time. Training and guidance is offered to dealers that have their sales penetration rates dropping below a certain level.

Alan Maloney, Trust Ford F&I director, has partnered with Jewelultra for around 10 years and said knowledge and confidence in the product are essential to a sales executive’s success.

He said: “If the product has been presented in the right way the customer would have been qualified and informed correctly.
If that’s the case, the customer will just be choosing the product that is right for them, rather than a sales person pushing them towards something.”

Strict manufacturer franchise standards will mean there can be limited opportunity for point-of-sale stands and material in showrooms.

This is where video and digital presentations have become essential to bring paint protection demonstrations to life.

Jewelultra has an online portal with video training modules for sales executives to refer to with a test at the end. These videos keep the training process consistent and make sure nothing is missed.

There is also a dedicated area of Jewelultra’s website where dealers can share franchise-specific videos demonstrating the Diamondbrite product either on an iPad in the showroom, or they can share links to a customer’s smartphone.

A breakdown on the financials for a Diamondbrite deal can also be shared through the same app.

Gtechniq has put together video packages specific to each franchise for customers to watch and engage with. There is also the more traditional print and digital brochures to help support the sales process.

Supagard has a presentation app that sales executives can use to show customers how the product works, but Benham believes it shouldn’t be overly relied on. He said: “I’d still rather it be a one-on-one personal explanation and the videos and animations are a great support tool, but they shouldn’t replace that sales process.”

Benham uses 50% as a benchmark for new car penetration on paint protection and he said that any level above that would start to raise eyebrows in terms of what is being sacrificed to get to a higher level.

For example, Benham said there may be a situation where a customer is undecided about a car and throwing in paint protection as part of the deal may help towards closing a sale.

He said: “Some dealers may well be reaching 80% or 90% but I would question whether you’re chipping away at your chassis profitability to get a sale.

“You’re essentially robbing Peter to pay Paul. For some dealers that might be a part of their strategy and that’s fine.”

The average for Jewelultra’s Diamondbrite product sits between 40-50% for new vehicles and between 20-25% on used cars.

This tallies with TrustFord that also looks for between a third to a half of customers taking Diamondbrite.

If sales penetration starts slipping, Supagard has a field sales team that will analyse what might be going wrong.

Benham said it’s important to determine whether it’s the sales process itself, the management approach, have teams switched focus to another add-on product or is a particular individual not on the ball?

Benham said: “Any of those areas will tip performance. Once we know what they are we can put a plan in place to help improve.

“Ultimately we want to work together with dealers on this because if the penetration is improved, it’s positive for all parties.”

Jewelultra puts on training workshops for new starters at a dealership and for those that have lower penetration rates to help guide them.

Maloney said: “We are pretty relaxed about things and we’ll look at whether a sales executive is having difficulty across a range of products. If they are, we’ll look to address skills around customer qualification that might need a bit of help.”

Benham said that if a customer objects to paint protection due to the price, that represents a failure to demonstrate the product’s value.

He also said that the stage at which paint protection is introduced in the sales process makes a big difference.

Benham said: “If you’ve closed a deal on a car and then you’re introducing paint protection at the end of that process it’s going to be very difficult to start asking for more money for something else at that stage. But if you’ve demonstrated the value of the product at an earlier stage in the process, you can present the ‘cost to change’ to the new vehicle, with the paint protection included.”

An important part of this approach is to properly qualify the customer to determine things like a monthly budget and factoring that in when calculating that cost to change.

Boseley said the biggest objection is usually the cost and some dealers can include paint protection as part of the PCP or finance deal to spread the cost, making it much more affordable.

There is also the benefit that a car treated with Diamondbrite will likely be worth more when sold or part exchanged, he said.

Boseley said some forward-thinking dealers will offer a £250 voucher that can be redeemed on top of their part exchange price if they sell their vehicle back to the same dealership as a used car.

It’s impossible to get away from money probably being the biggest motivator for sales people.

Boseley acknowledges that a lot of what motivates a sales team will still come down to the amount of profit that can be made.

He said: “That will often determine where you sit in terms of priorities with the sales executive.”

Trust Ford makes sure available bonus payments are “balanced and responsible” across all add-on products to make sure sales executive don’t favour one over another.

Maloney said targets are worked out on a quarterly basis and these meetings will highlight particular areas where some dealerships might be underperforming. This will then trigger support or training to address what might be going wrong.

Benham said discussions will take place with each dealer to look at where Supagard sits in terms of bonus payments compared with other add-ons a dealer’s portfolio.

He said: “We have to establish that there’s a level playing field to make sure we’re not falling behind in terms of a sales person’s priorities.”

However, Supagard also works with dealers on an incentive structure for dealers and that might not just be in the form of individual cash bonuses.

Some dealers look at having a group bonus to fund things like trips away or team nights out.

Benham said: “It’s about finding out what makes the team tick and putting something together that’s going to appeal to the most people.”