Hit the right targets with your marketing budget 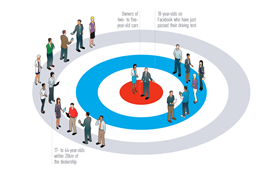 Targeted marketing is essential for car dealers – putting the right products in front of the right people. The rise of the internet has brought social media and email campaigns to the marketing fore, but dealers’ own databases also provide a valuable source of prospects.

Matt Brown, marketing director of Essex Auto Group (EAG), compared marketing segmentation to a cucumber – “however thin you want to slice it, customer gender, customer age or model age, last time we saw the vehicle, and so on”.

For an invitation to preview the new Ford Edge, EAG excluded owners of models like Ka and Fiesta and anyone who bought a car within the past 12 months. From that, it used last date in the workshop or any other form of contact to whittle the list down to owners of two- to five-year-old cars.

“Rather than spend £20,000 on a blanket direct mail campaign, we wanted the lowest-hanging fruit, in this case 396 good-quality people coming into the showroom,” said Brown.

He said the group has been on a “culture-changing journey” since 2012 to refine and exploit its databases. The capture rate on next service date, including MOT, has been especially successful, rising from 45% to 95%.

That service information, in particular, can provide prospects for car sales.

“Identifying cars we haven’t sold, that is they were bought from another dealer, but we are seeing them for service, has given us 15,000 extra opportunities since 2012,” said Brown.

“Rather than spend £20,000 on a blanket direct mail campaign, we wanted the lowest-hanging fruit”Matt Brown, Essex Auto Group

“Not only does it allow us to target the exact people who will be relevant to our promotions – it also helps protect our database. There’s nothing worse than giving a retailer permission to contact, only for them to abuse this by bombarding you with offers that are completely irrelevant.

“Segmentation has a positive knock-on effect to our metrics because we are taking the time to think about what our customer wants to receive, it increases click-through rate and therefore improves our cost per conversion.”

Perrys uses Facebook and Google to target conquest customers. “Using their audience profiling, we can send adverts to the people relevant to our promotion,” said Manning.

Perrys had “great success” with its Peugeot Just Add Fuel Telematics offer, using Facebook to target 18-year-olds who just passed their driving test. Perrys also took advantage of the platform’s data to target parents who may be helping to fund a car purchase or, at the very least, advising on car choice.

Getting the physical-digital balance right

“It’s an issue of getting the right balance between digital and physical,” said Deacon. “But leaning towards digital channels means we are more targeted, it’s more measurable than traditional media.”

With a franchise portfolio ranging from premium to niche, Ridgeway uses Facebook across all brands and could have up to five separate data-driven campaigns for one brand at any time. “It offers a great amount of reach to drive clicks onto our website,” said Deacon.

As well as product updates, Ridgeway’s website undergoes regular “creative examination” to gauge viewer appeal, along with response rates across its marketing channels.

These are split by model and dealership across sales, service and a combination of both. That’s further refined to gender, age, home and work postcodes and so on, working in conjunction with manufacturer profiling.

“What we can do is amplify that profiling on a local basis,” said Deacon.

Ridgeway does no newspaper and radio marketing, compared with seven years ago when it accounted for 5% of its marketing budget, alongside 15% for direct mail, 20% email, 15% SMS and 40% digital.

There was no allowance for social media, which today accounts for 15%, along with 5% for direct mail, 15% email, 5% SMS and 60% digital. Ridgeway’s portal is its primary resource – according to Deacon, it generates about 14,000 “hard leads” a month.

“Traditionally, it was reckoned that it cost £150 of marketing to sell a new car and £75 for used. Now it’s typically down to half that,” said Deacon.

Though East Midlands-based Sandicliffe Motor Group uses social media such as Facebook and You Tube, along with other digital platforms, its head of marketing, Nigel Falkiner, said TV, radio and direct mail still have a key role in the communications chain.

“There are the active people who are forever on the internet looking for the best deal and the passive ones who need a spark that often comes from the more traditional media,” he said.

“You could have someone driving a two- to three-year-old car and not looking to change until they learn of an offer through TV or radio to ignite that spark that leads them to your website. These tend to be conquest sales that generate more profit.”

Sandicliffe’s marketing budget reflects this, with 42% allocated to radio, 22% to press and 24% to TV.

About 5% is spent on direct mail for “specialist” events, such as launches, where volumes are lower, but conversions are higher. To reduce postage costs, Falkiner uses a bespoke piece of software to examine 10 different databases to eliminate duplication.

“Walk-in” traffic is routinely quizzed to find out what triggered the visit and out of the 10% or so of “captured” information, up to 60% is through Sandicliffe’s website.

Sandicliffe delivered 587,000 emails last year for 77 campaigns with a click-to-open response of 22.2% and a click-through to the website of 17%.

ThinkFord’s favoured marketing channel is Sky AdSmart, which shows different ads to different households watching the same TV programme. Households can be selected on factors such as age, location and lifestyle, based on Sky’s customer data and profiler agencies such as Experian.

“Each campaign gets better. Website traffic goes through the roof and then drops afterwards. Our next one is primarily for used cars and, like previous campaigns, we take out categories that didn’t respond and focus on those that did. It’s not an exact science, but Sky is in the process of refining its stats.”

AdSmart accounts for most of Think Ford’s marketing budget, followed by pay-per-click online.

The company also uses Facebook, but Findlater “can’t remember” when it last used newspaper marketing. It has abandoned radio for the same reason – both media are difficult to measure.

“We are constantly refining our techniques to target fewer people, but with higher conversion,” said Wade.

The company’s marketing efforts are equally split between offline and online, with most promotions focused on finance offers across all platforms.