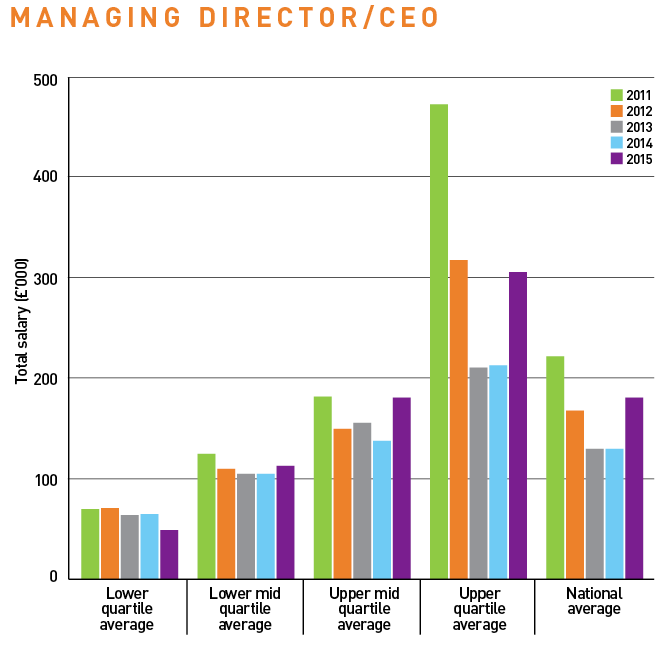 Employee costs are one of the largest expenses in automotive retail and dealers have to get the balance right between keeping costs down and paying salaries high enough to attract the right people.

Steve Le Bas, BDO audit director, said dealer groups are having to pay big money to attract top leaders. Figures for the upper quartile show some dealer groups are having to pay up to £306,000 to attract the best chief executives, while finance directors can command £258,000 at the highest level. The highest paid dealer principals were paid £152,000 last year.

“The senior positions in the industry are starting to see pay go up” Guy Liddell, Motor Trade Select

“Manufacturers are getting much more involved in the recruitment process, particularly for the senior level jobs. Getting the right person to ‘please the franchise’ can see competition for the best people pushing salaries up because there is generally a smaller pool of talent.”

The next-highest average salary packages continued to be new car retail managers, fleet retail managers and used sales managers, whose total packages were in the region of £32,000-£80,000, a drop compared with last year at £37,000-£85,000.

Steele said: “There are certain dealer groups that are known for not paying well. Some dealer groups will also sacrifice getting the right person because they won’t be flexible on salary, even within two to three thousand pounds.

“There are exceptions to that rule on both sides, however.” Publicly traded dealer groups can offer share options and company car schemes as further benefits to tempt employees, whereas family-owned groups tend to want to keep firm control over shares at the company.

Steele said: “It’s worth stressing there are dealer groups on both sides that are brilliant with what they offer and how they look after their staff, but there’s always a spectrum.”

While some job roles have seen pay packets remain static, overall average salaries have increased by 2.6%.

However, Le Bas said pay levels are fairly stagnant, with the comparative average in 2011 being £37,000. The increase in 2015 was split evenly between small rises in base salaries and incentives.

Steele said he too had seen stagnation of salaries, particularly in lower level roles.

The lowest pay banding in the BDO statistics continues to be parts delivery driver, on an average of £15,000, up from £14,000 last year. Average salaries for the role have remained within a margin of £1,000 for the past five years.

Service advisers’ pay has stayed the same for the past four years.

Steele said some dealer groups face problems because they have not reviewed pay for certain job roles for as long as 10 years. When it comes to recruiting someone new, they do not pay the going rate because they are worried about increasing pay for current staff.

Steele said: “Ignorance is bliss to some extent. That goes for the employee and the employer.

“Some dealers don’t really think about pay reviews or what is going on in the industry until it comes time to recruit. Employees looking for a new job are also often unaware that what they are being paid currently is below the going rate. Pay is a taboo subject in the UK. We don’t talk about it. It’s like asking someone their age.”

Steele said over the past five years, expectations for earnings in many job roles have gone up, but actual earnings have not.

Another trend that refuses to budge is the ratio between basic pay and bonuses.

The automotive retail industry continues to talk about increasing basic salaries to take the onus off staff having to chase volume. However, BDO’s figures show this isn’t changing, with up to 67% of a sales executive’s annual salary made up from bonus. The average basic pay for a retail sales executive in 2015 was at £14,171 with a bonus of £21,355, for a total figure of £35,623.

Steele said while many would like the ratio to change, the reality is that manufacturer target bonuses continue to drive the industry.

Le Bas agreed that while there is a groundswell of opinion that things should change, there have been no large moves to make it happen.

He said: “On the premium brands we have seen a higher level of basic, but that is to attract the best people. It is very competitive at the moment and no one is moving so premium-brand dealers particularly are having to increase their offers to tempt people to move. The industry is pretty dyed in the wool and nothing dramatic has happened.”

Malcolm Miller, managing director at automotive learning specialist RTS Group, said the traditional pay and reward system for sales executives is still built around a smaller basic salary, with commission and bonuses on sales or profit.

“There are pros and cons to this, with some sales people making a healthy salary, but on the other side it can lead to high staff turnover and in turn customer satisfaction can suffer,” he said.

Miller added that beyond the financial reward, staff are looking to work for the best brands and the best managers: “The long hours and ‘low basic’ culture of many

dealerships often overlook the importance of non-financial rewards. Having a supportive manager, enjoyable work environment and flexibility over hours can be just as much of a motivator as higher pay.

“In a recent survey, the CIPD (Chartered Institute of Personnel and Development) found nearly half (42%) of employees have left a job because of a bad boss. Pay and reward is important, but working for a supportive manager and, particularly, receiving a good induction to the business are important factors too.”

Steele said dealers don’t need to get caught up in gimmicky benefits seen at places such as Google (barista training and unlimited chocolate bars, for example).

He said: “Things like unlimited Mars bars and a bottle of beer on a Friday can be quite superficial.

“When it comes down to it, people want to be paid what they feel they deserve, they want to be respected and they want a good manager. If a dealer group can get those three things right, they will attract and retain the best people. Everything else is ancillary.”

Pensions and the living wage

The number of employees making pension contributions in the automotive retail industry increased to 75% last year, from 55% in 2014, with it now being mandatory for UK employers to offer enrolment.

However, Le Bas explains that the figure is never likely to reach 100%.

He said: “Some employees will always opt out of the pension schemes, particularly younger employees who don’t want to contribute to a pension in that stage of their life, they would rather have the extra cash when it comes to pay day.”

BDO is predicting an increase in salaries overall this year, partly due to dealers continuing to experience good levels of profit and also due to the introduction of the living wage in April this year.

All workers aged 25 and over are now legally entitled to at least £7.20 per hour.

As a result, lower-paid roles are expected to see a higher than average increase in the salary report next year. There is a target in place for the living wage to increase to more than £9 an hour by 2020.

BDO’s Motor Salary Survey digs down into the detail of automotive retail pay across 26 positions, from chief executive to parts delivery drivers.

The data has been compiled confidentially from 285 dealership locations in the UK and a minimum sample size was established for each position to ensure anonymity. Dealers participating in the survey ranged from single-site dealerships to large publicly traded dealer groups.

For more on pay and motivation, attend the AM/IMI People Conference on June 16. For more information, visit ampeopleconference.co.uk.