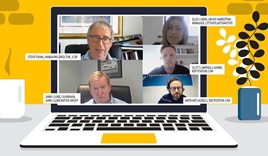 Some car retailers are feeling the pressure as manufacturers demand they to get their digital houses in order to take advantage of any market recovery ahead of what is expected to be a tough Q4, according to delegates at AM’s first virtual round table (held before 'Lockdown 2').

The return from H1 lockdown

Ellie Cohen, group marketing manager at Greater London Volkswagen specialist Citygate Automotive, said: “The pent-up demand has been crazy. It’s been about managing that correctly and converting those enquiries.

“Everyone has had a bit of a break in terms of the sales teams, but now they’re ready and raring to go.

“As long as we’re feeding those enquiries through to them, they’re up for it and they want those sales.

“We’re on track to deliver a strong September. We had a successful July and August. The biggest task for us is Q4. Our message is that it’s not just business as usual, but business is better because we’ve learnt from everything that’s been thrown at us during COVID-19.

“We’ve kept everything going, whereas I think some retailers have stepped back a bit.

“The customer experience hasn’t really stopped. From my perspective, as a consumer, I’m ready for companies to get back to normal and I think it can be refreshing for other consumers that want to get back to a bit of normality.”

John Clark, chairman of John Clark Motor Group, which has dealerships up and down the east coast of Scotland, said used car sales have been particularly strong during lockdown, despite showroom doors not being able to open until June 29.

Clark said: “During lockdown there was a significant swing to remote selling. That has continued, but there are also still a lot of people locally looking for their next car.

“New car business hasn’t risen to the expectations the manufacturers would like. I’m very disappointed that some OEMs are talking about big numbers coming in Q4.

“The final quarter will be the big push and I don’t think the market will be there. We’re starting to realise how many people will be unemployed and Q4 will be very difficult as a result.

“We’ve built a reasonable order bank in September, but not what we would in a normal year.

“We’ve eaten into that new order bank in July and August, so the numbers the SMMT is looking for are not going to be realised, unless it’s by self-registrations, which we are steering completely clear of.”

Clark said there has been some push into fleet markets on deals that are “unrealistic” in order to get stock into the market.

He said: “We’re also seeing a reluctance from consumers to commit to PCP at the moment and more of a swing into people buying used vehicles on finance.

“This swing away from PCP could be because some of the residual values are not looking realistic and there’s not enough equity in the vehicle.

“Credit is also tightening. People who were seen as good risk before are not as good any more.”

While Clark said July was good for the group, the business still needs to make up on ground it lost during the lockdown.

Clark added: “There’s no group in the country that didn’t lose money during lockdown. If they didn’t, they’re probably fiddling the numbers.

“We’re at 82% capacity in terms of welcoming staff back from furlough to the business.

“We’re considering very carefully what we do about bringing back the remaining numbers. I’m optimistic because we can control our stock, we’re cash rich and we have all the good people back. But I’m pessimistic about manufacturer demands and what’s going to happen with Brexit.”

Clark said remote selling has increased since lockdown, with the majority of sales being used cars that have the right price, right spec and warranty.

He said: “We’ve seen that on all the premium brands and even some of the non-premium stuff. For new cars, it’s been entirely based on price.”

John Clark Motor Group set up remote selling hubs during lockdown that included sales teams of three executives and one manager working from home, dealing with enquiries for all of the company’s 12 franchises.

Test drives were offered at people’s homes and completed sales were delivered by transporter. All cars were sanitised before delivery.

Clark said: “I think a lot of consumers appreciated that approach.”

The average sales executive at John Clark is selling 28 cars a month and some are doing 45 a month. Before lockdown it might have been 12 or 14.

Deliveries and product knowledge is left to other people in the team, so the sales executives have been selling more as a result.

Clark said: “Lockdown and working remotely have actually meant everyone is planning their time a lot better.”

Cohen said that London has seen a higher number of customers happy to come back into physical showrooms compared with Clark’s experience in Scotland.

However, the lockdown has been an eye-opener for some concerning the benefits technology can bring to the sales process.

Cohen said: “For years it’s been a struggle pushing video and technology. It’s been an eye-opener for some of our team members in terms of what technology can help you do.

Steve Young, managing director at ICDP, the automotive distribution and retailing research company, counselled that, with increased reliance on video in the sales process, manufacturers should start to introduce standards for this content.

Young said: “When you can’t put personality into the sales process, it then starts to become more of just a conversation around price and you’re then in a race to the bottom.”

Clark said the view from manufacturers on targets and demands will all depend on how Brexit goes.

He said: “I would hate to think the manufacturers have a whip hand on top of the dealers again.

“The level of investment we have had in bricks and mortar will have to change in the future.”

Young said: “The problem is that OEMs are setting things centrally, sometimes away from the UK.

“From their point of view, Brexit isn’t an issue for the guy that is setting the standards for a showroom.

“Network strategy directors can see that showrooms won’t be required at the same scale, but there’s still someone sitting in their same building with a hat that says, CI facilities, and his job depends on coming up with new ideas.

“In a corporate environment, he’s not going to get very far if he tells his superiors that the standards that are already in place are good enough as they are.”

“There isn’t the level of cash kicking around to invest in those peripheral things. We need to concentrate on customers, service, stock and your people. That’s where my priorities are for the next two years at least.”