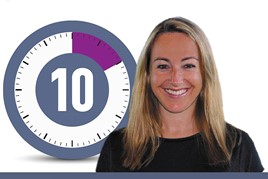 In the past, you have been employed by online corporations, including Facebook. What similarities did you find when you joined CarGurus?

I started my career in finance, working in London and Chicago for three years, but I wanted to move into the tech sector and joined Facebook in 2013 and ran Dropbox’s European operations from Dublin. I really wanted to work in industries that are changing, and I think CarGurus is changing the way people buy cars. CarGurus came knocking in October last year and the opportunity was too good to pass up. Our co-founder, Langley Steinert, changed the way the world goes on holiday when he founded TripAdvisor and now he’s trying to change the way the world buys cars.

How have you been received as a finance and tech professional in an industry that can be quite insular?

I own the fact that I’m not from the auto industry, but I think car dealers also respect the fact that I’m a new set of eyes and ears and that we are coming at the business of selling cars from a very different direction – from a search angle. Our dealer base ranges from sites with 10 to 15 cars to those in the top 10 of the AM100. I’ve worked for big corporations in the past and in the auto sector I’ve been meeting people who have built their own businesses and that are self-made. I have the utmost respect for our clients because of that.

The car retail sector has been criticised for being slow to react to technological advances. Is that what you have found?

I think the digital revolution is very much under way. The big challenge for us and for car dealers is attribution, establishing where a lead came from in that journey from offline to online, and that is where we have focused a lot of our attention.

How does CarGurus determine attribution?

The first step in a CarGurus vehicle search is always the input of a postcode, and that obviously correlates closely with homes in a particular area, so we can correlate dealers’ customer data with our search data and pinpoint where we have generated a lead.

Another area we want to educate dealers in is the importance of map clicks. Car buyers who click on a map are normally low-funnel, high-intent shoppers. Dealers really want to determine where their leads come from to determine the return on investment from their advertising.

When CarGurus launched in the UK in 2016, Steinert said ‘profitability isn’t an issue’ as it targeted Auto Trader and Motors.co.uk. Is it feasible for CarGurus to overtake Auto Trader and has that pledge changed since your IPO in 2017?

We are the number one automotive website in the US now. When CarGurus joined the sector there 12 years ago, it was a duopoly. If you had asked people there if CarGurus would become the number one market player, they would not have believed it. Now the business has a proven model of success and it will continue to invest and build momentum in the international market.

Our Q2 web traffic is up 54% year-on-year, with 3.5 million uniques internationally. I’ve been impressed with how open dealers have been to the product.

We became number one in the US by investing hundreds of millions of dollars in marketing and treating car buying as a search problem. At our headquarters in Boston, the business runs algorithms and crunches data through the night to help facilitate the most efficient introduction of car buyers to car dealers. The business currently has a staff of just under 700 overall, with 45 at the European headquarters in Dublin and five on the ground in the UK.

How many car retailers are currently represented on CarGurus’ platform?

In our international markets – Canada, the UK, Germany, Italy and Spain –  we had 3,098 paying dealers in Q2 – up 83% year-on-year. Dealers pay on a marketing subscription basis, but the price varies depending on the size of the inventory and the number of leads we think we will provide.

We make no guarantees, but our data-savvy retailers see the results. We had one dealer who told us that he needed to sell 21 cars to make a return each month and he saw his CarGurus-generated leads deliver 110 sales, so we’re confident of our results. Ultimately, we obviously want partners for the long term so we want dealers to see the returns they are making so that we can forge lasting relationships.

The number of dealers that gained CarGurus ‘top rated’ dealer status rose 50% in 2018. Do you think businesses find that kind of accreditation important?

CarGurus is built on the same foundations as TripAdvisor, in that it aims to deliver transparency to the consumer. At TripAdvisor they have a certification of excellence, so we’ve replicated that.

Seven days after a transaction, we send our own survey to car buyers to gauge their experience of the dealer service and those ratings feed into the online rankings and also determine the Trusted Dealer accreditations.

I think dealers see it as a great validation of what they offer because it’s not us rating them, it’s customers. The ratings are effective. When did you last stay at a hotel and not view reviews first?

Car retailers have accused online platforms of feeding a ‘race to the bottom’ to appeal to customers on price alone. Would you say there is truth in that?

We are not ranking dealers by the lowest price. We’re not after a race to the bottom. There could be a higher-priced car, or a car with a high spec and low mileage, and that is something we want to give credit for. Dealer ratings are also taken into account. It’s a big picture. Ultimately, we think that if you take into account and offer all the information that car buyers want, they will vote with their feet and we’ll win the war.

What new features are likely to make an appearance on the CarGurus platform in the coming months? Will we see a migration of finance or new car sales onto the site?

Finance isn’t something that we offer in the UK and the best indicator of what might be introduced is indicated by what has been tried and tested in the US market. SEM Plus is our new search engine marketing product. We trialled it in the US and now we have three sites trialling it here.

Some online car marketing sites have grown their exposure through online editorial and video. Is that something CarGurus is working to develop?

CarGurus has appointed Chris Knapman, formerly the head of motoring at Telegraph Media Group, to lead its online editorial content and that is something that we will be developing very much during 2019. He is currently working on a series of used car reviews, which takes into account factors such as servicing intervals and residuals, and that’s something that feeds into the added information and transparency that is core to what we offer. Some dealers have expressed an interest in having that content embedded in their own websites and I’m sure that is something that can also add value to their online offering. tom sharpe