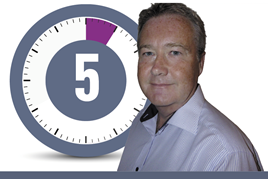 The RAA is now into its 14th year. What were its original aims, and have they since been fine-tuned?

The RAA was established on the back of a Ford dealer council meeting. The big family-run and privately owned dealers couldn’t compete adequately with the big PLCs, who were increasingly dominant.

The idea was put forward that a new organisation – which would exclude PLCs – would have a combined buying power and commercial strength to help members punch above their individual weight.

Its initial aims were to champion family-run and privately-owned dealers, to make them more competitive by sharing ideas and best practice, and to help them become better motor retailers.

There has been fine-tuning. Different targeted suppliers, more mandatory programmes and more control of our spending patterns, but no fundamental changes.

Are you looking for new blood?

Very much so. Consolidation and acquisitions will always occur, sometimes through succession planning or exit strategies by members. In 2017, for instance, we lost three members to PLC acquisitions, including EAG, a founding member.

In May, we took on three new members – Paynes of Hinckley (a main Ford dealer since 1922), Birchwood Motor Group and Dinnages. We are always looking to meet potential new members, to explain the RAA’s benefits to them, and learn more about their business model and ambitions.

We think about £3 billion is the right level to maximise our commercial strengths and purchasing power. Membership numbers around the mid-20s also help us keep the feel of a club.

A typical member would have between four and eight sites, but our largest (Hendy Group) turns over more than £530 million from 25 locations.

If groups think the RAA could work for them, they should certainly get in touch.

Is it possible to say what typical annual savings a member may achieve?

It’s impossible, because our programmes range from used car finance to number plates, and every member uses different amounts of each. However, and over a long period, the typical savings made by each member will be about 10 times their annual membership fees. (The RAA has previously stated combined savings of more than £5m a year.)

Are your membership fees based on the size of each dealership?

Everyone pays the same amount, regardless of size. There is a one-off joining fee towards the cost of running the RAA, and an annual fee. The annual fee varies according to the services offered by the RAA, but we’re not a profit-making organisation, so we just raise sufficient money to cover our costs.

All 23 members have an equal shareholding and the same voting power. If they leave, or are purchased by a PLC, they have to sell their shares back.

Are suppliers receptive to being asked to tender for RAA partnerships?

Very. I receive several calls every week from suppliers looking to engage with us, and become an approved supplier.

Your organisation has enjoyed a long partnership with Manheim Remarketing. How did it win the RAA’s loyalty?

At a local level, Manheim understands our members better than any other . They have always understood what we are about, and how the relationships works between the RAA and its members. No other supplier in this field has come close to that.

You once suggested that RAA benefits would move beyond simply purchasing. Has that happened?

It has, although there is much more to do. The best example is our RAA Marketplace platform, which has been tremendously successful. It displays all RAA stock in real time, so at any one point there will be 10,000-12,000 vehicles there. Members can buy and sell them between each other and at no extra cost.

We have seen previous annual figures of 220,000 new and used car sales, and combined annual turnover of £3bn, across your membership, What are you expecting for 2018?

The UK motor industry is going through a volatile period, with Brexit and consumer attitudes towards diesel. Does the RAA expect that volatility to last, or has it become the ‘new normal’?

We expect it to last and to become the ‘new normal’, although I don’t think we are there yet. Manufacturers are wrestling with too many issues to be able to give the dealer network the clarity they need to make long-term plans, so we are somewhat ‘treading water’ at the moment.

We are very confident in the long-term future of the franchised dealer model, but it will need to adapt to handle – or possibly embrace – the influences of ‘disrupters’ as it does so.

The RAA is listening, absorbing and responding to these new market forces, but the customer is always at the centre of what we are about. We are an alliance of like-minded businesses, which will always hold value for those who choose to buy from us. IAN HALSTEAD