What do car dealers want from their DMS? 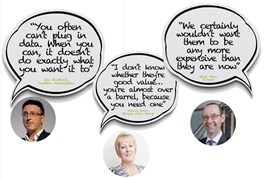 Their sales reps will tell you that dealership management systems (DMS) are God’s gift to the car dealer, providing ‘flexible, scalable solutions’ to help sales executives on the shop floor, but many dealers remain unconvinced.

Changing or adopting a DMS to provide dealership staff with an all-encompassing overview of their business and make things run as smoothly as possible is a sensible business decision, but it comes with large costs and lots of disruption. So is it worth it to make the change?

For many dealers, the ideal system has a clean, intuitive ‘front end’, which new staff members can quickly be trained to use, works with all the other software used in the dealership and integrates all this seamlessly, with no need to switch between various logins or to key in the same data multiple times.

“It would need to connect to manufacturer systems, it would need to give us a complete view on every area of the business from sales to service to accounts to parts to marketing. It would need to accept incoming data and output data that would work with third-party systems across the board.”

However, while dealers have lots of choice in the marketplace, it seems that no single provider is offering that sort of product.

Ian Godbold, marketing and CRM director at Cambria Automobiles, believes the problem is primarily one of integration.

“With DMS systems, you often can’t plug in data. When you can, it doesn’t do exactly what you want it to – that’s my biggest challenge,” he said.

“I want to plug information into my DMS. I want to know what a customer has done before walking into the dealership – things like whether they’ve been on our website, what cars they’ve looked at, what they’ve clicked on – and that’s not available, I don’t think, in any DMS at the moment.”

However, Godbold doesn’t entirely blame the providers for this shortcoming.

“I find that the pace of technological change is a real challenge for DMS providers,” he said. “The way things are moving forward, they can’t possibly keep up.”

Nigel Shaw, group finance director of JCT600, said modern DMS systems are “a fair way away” from his idea of perfection.

He agreed with Godbold on the lack of integration on offer, pointing out the huge number of plug-ins a DMS would need to support. He said it is a particular problem for multi-franchise dealer groups.

“Particularly where you’re multi-franchise like we are, you end up with a number of manufacturer partnerships where, I think,  the factory effectively drives their technology needs – because they have to make the product – so we end up with a range of systems that we have to integrate with.”

In an attempt to get around this shortcoming, some dealers are being forced to double- or even triple-key data, while others are trying to use more software to avoid that pitfall.

Moore said Sturgess’s need to key in data multiple times is costing the company in terms of efficiency and mistakes.

“We’re re-keying data into third-party systems that we have to use for various and sundry things,” she said.

“It’s taking a lot of time out of the dealers’ days, and, of course, as soon as you’re double-keying or triple-keying, you’re opening yourselves up for mistakes to be made or for data not to be transferred over.”

To avoid this, Cambria has looked into building its own plug-ins – an undertaking that Godbold described as “a huge challenge”.

“Like most companies, we’ve got a lot of third-party providers providing our electronic customer relationship management (ECRM) side, our engagement data…  where you have to log into different systems. There’s not one system to bring it all together, which should be your DMS, because that’s a centralised area – that is your database.

“We have looked at trying to plug all the third parties into one area, then we plug it into the DMS ourselves, but it’s a huge challenge.”

It is not just efficiency worries that bother dealers – reliability is also an important issue.

“The DMS is vital – you cannot operate a business without it – but they do need to get more reliable,” said Moore.

“We had one very disastrous occasion with our system. Because our year runs from January to January, the dying days of December are absolutely vital for invoicing of parts, vehicles, accounts and so on, so when our server died in the last few days of December, it was not good.”

The failure caused such problems for Sturgess that it prompted the company to move to a cloud-based system that stores everything online.

“It’s now hosted in the cloud, and that has worked well for us, because you don’t have to worry about a server falling over or incurring an extra cost,” she said.

With dealers reporting such major flaws in their systems, then, perhaps it’s no surprise that they struggle to determine whether they represent good value for money.

“They are expensive, but then you can’t do without them,” said Shaw.

“We certainly wouldn’t want them to be any more expensive than they are now.”

Moore is equally undecided: “I don’t know whether they’re good value. In a way, you’re almost over a barrel, because you need one, and you need a class-leading one that can support all the areas of the business.

“I don’t like spending money, so I’m going to say no, I don’t think they do.”

While dealers are quick to complain about their DMS, many still  seem cautious about changing them.

Moore said changing a DMS is entirely possible – and indeed Sturgess is currently looking into it – but experience has taught her to be cautious about the prospect of wholesale changes.

“It would be a huge task, and not one that you would undertake lightly or quickly. You would build up to it, probably over a year or 18 months.

“I remember when we moved on to this version and it wasn’t something that happened overnight.

“We have to have lots of sit-downs with our various partners that we could work with and discuss it internally at board level.”

Godbold said Cambria recently changed its system and he acknowledged that it can be a painful process, but is more bullish about the prospect of a move.

“But I’ve seen the pain it takes to implement that and integrate that.” Godbold insisted that the benefits of making the change must heavily outweigh the strain of doing so. JAMES FOSSDYKE