Are used car values on the way to another crash? 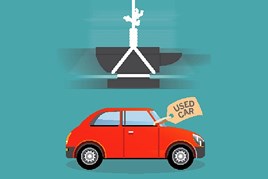 With a lot of pressure being placed on pushing new car registrations over the past two years, used car dealers are unsure about when the  effect of this will be truly felt in their market.

There is additional uncertainty ahead in 2015, with the general election taking place in May, talk of deflation and ongoing concern about the impact of maturing PCPs.

However, the used car market experts AM has contacted believe any drama in the market is farther on the horizon.

So should UK independent dealers be on standby to act? The economic crash of 2007/08 put used car values into turmoil, with some major dealers writing down their premium SUVs and prestige saloons by more than £1,000 a month as worried consumers either stopped buying or bought the cars they could run most affordably.

Data from the National Association of Motor Auctions (NAMA) shows that the growth in average used car values enjoyed over the past two years slowed in the second half of 2014 to almost a standstill.

Robert Hester, editor of Black Book Plus at automotive intelligence firm CAP, said the used car market in 2014 was very steady, and looking at 2012 and 2013 the markets were very similar. Hester believes there has been no evidence behind thinking that used car values will come crashing down in 2015.

“We’ll see plenty of performance over and above CAP for the right cars” Robert Hester, CAP

However, he is less optimistic about 2016 onwards, given that by that stage the UK annual new car market will have remained above 2 million for four years. That equates to about 1.2 million more 0-4 year old cars into the market by 2016 than were available during the 2008-2011 downturn. Hester believes independent used car dealers may begin to compete more strongly in 2015.

During the downturn, many franchised dealers broadened their stock profiles to hold slightly older, higher mileage, lower value part-exchanges that appealed to the budget-constrained customer.

This put significant pressure on independents, who were left to compete with each other at auctions for the used car stock that was available. Hester said this trend has continued, but is now in decline because of the drive in PCP-funded retail new cars from the past three years.

Franchised dealers are proactively getting those PCP cars back in ahead of the end of the contract, putting the user into a new car and getting a second bite with the original vehicle as a low mileage, good condition used car.

“They’re not having to buy a lot of stock because they’re bringing in their own, and the result of that is that they’re trading on, which plays into the independents’ hands,” said Hester.

He does not predict that this greater availability will lead to a rapid slump in values. “All through 2014 the right car made absolutely ridiculous money, and I think that will carry on. We’ll see plenty of performance over and above CAP for the right cars.

“If the market does come under a lot of pressure for any reason then values have a long way to fall before being anything like they were before 2008, and I can’t see it personally.”

At Glass’s, head of valuations Rupert Pontin said there will be a greater volume of used cars, and a greater choice, coming to market throughout 2015. He believes the outlook for the first half of the year at least is positive, as the Government tries to avoid any upsets ahead of the election.

Pontin said Glass’s has already detected since June 2014 an increase in trade stock coming to auctions and trade-to-trade online platforms, building by 1% or 2% per month, and he expects this will rise more rapidly from next spring. Levels are currently at their highest for 30 months.

Whereas fleets had been changing their strictly business-focused cars, now their perk car users are being allowed to change and that product, typically with higher specification and extra equipment, is now reaching the market, Pontin said.

This gives trade buyers more choice and may impact the values of the more common, standard ex-fleet cars. He said franchised dealers are already no longer in desperate need of stock, and can afford to be more selective on the right car at the right price.

Pre-reg activity can filter down into used car market

Pontin said he is bothered by the pressure being put on the UK’s new car market, and how that may filter down to the used car market.

Some dealers are already halting used car purchases towards the end of the month due to the knowledge that their manufacturer will require them to take a pack of new cars as the registration target nears. Coupled with the trend of bringing PCP customers in early to change, Pontin fears this will put pressure on the market for 18-24-month-old cars too, with franchised dealers forced to dispose of excess stock to independents.

“For a while there will be a marketplace for them, while independents can get their hands on some nice 18-month old vehicles, but then they’ll get towards saturation point. So how do you sell? The only way to sell is to create a used buyer for the car, back with creative finance or dropping the price. Then we’ll have a net effect. That’s a long way down the line, but looking at what might play out over the next three years, that’s a scenario.”

Research by BCA showed used car sales volumes returned to the pre-recession level of 7.4 million in 2013, 1.1m more sales than the mid-recession low of 2009, and the used car market value climbed by £4.6 billion to an all-time high of £42.7bn.

Value records continued to be broken in 2014, giving dealers more reasons to be cheerful. But with the continued push of new cars from manufacturers, dealers cannot afford to take their eye off the used car market.

Glass’s and CAP both urge caution around holding significant stocks of D-segment large family saloons and estates. There are many available from ex-fleet sources, but large cars such as

Vauxhall’s Insignia, Ford’s Mondeo and Peugeot’s 508 have fallen out of favour with the majority of new car buyers and this trend is filtering down to retail used car customers. CAP’s Robert Hester said there are still customers for such used cars, attracted by the space and value for money on offer,  but they will expect to get a bargain.

CAP believes EVs are still some way from seeing stability in the used car market. It’s a segment that has seen continual pressure on values already. If Tesla is successful in bringing to market its next lower-medium segment electric car, with a range of more than 200 miles, Hester believes that will “destroy anything already in the marketplace with less than 100 miles range”.

The lifestyle SUV or ‘soft-roader’ is attracting consumers who like the higher driving position, space and car-like driving experience. Both CAP and Glass’s agree this is an exciting segment and one which dealers ought to be involved in, even if it means stocking vehicles at relatively high price points.

The petrol-electric hybrid has been available to new car buyers for several years now, but successful sales of such cars to used car customers requires accurate know-how, suggested Pontin at Glass’s. He believes this segment is an opportunity for the switched-on dealer, but sales staff must be well trained and properly qualify the customer’s driving habits and needs.