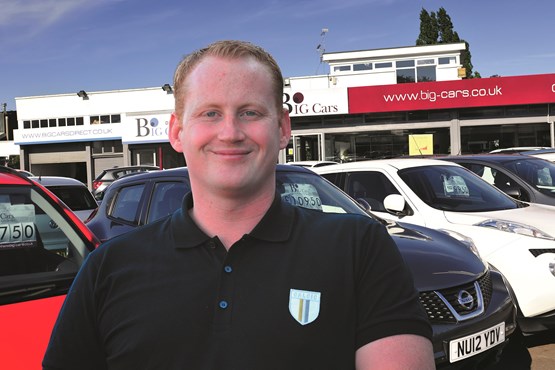 A recession may not seem the ideal time to start a business, but some big names – Microsoft, FedEx, General Electric – have made it work. In 2008, Adam Stott quit his sales job at a BMW dealership, sold his house, moved in with his mother and Big Cars was born.

The recession hit the motor industry particularly hard, so Stott started small, with a modest premises in the wilds of Essex. By 2009, he had made enough money to move to bigger premises in Chelmsford, from where he delivered a £1 million turnover.

Six years later and Stott heads a company with two sites (Witham and Chelmsford), 46 employees and a projected turnover of about £25m this year. He is also on the brink of opening a dedicated service and repair centre. Initially this will be used to meet the majority of his vehicle preparation needs in-house, but he plans to open the facility to motorists early next year.

The success of the business was not always so assured, however. The economic downturn brought with it a lack of stock and even when stock was available, lenders and banks were reluctant to finance its purchase.

“In the early days, funding was practically impossible to come by,” said Stott. “Now we are able to pick and choose our financial partners.”

‘I was confident that I could run my own company’

After leaving school, Stott worked for his father’s building firm, before taking up a job selling electrical goods. Within a year, he was promoted to senior sales person and was the company’s highest commission earner.

This talent for sales continued when he moved to a Ford dealership, where he became the top salesman in just six months. After a short time at Alan Sugar’s private jet leasing company, Amsair, Stott began working as a salesman at Sytner’s Harold Wood BMW dealership.

By his mid-20s, he was earning a princely sum, but felt it was unlikely somebody so young would be given the opportunity to head up a dealership and left to set up his own.

“My dad has always owned his own business and my mum ran her own café, so it was almost inevitable I was going to follow in their footsteps,” he said.

“Their experience also meant I was confident that I could run my own company.”

How a millennial markets cars

Not surprisingly, as a millennial (those who have grown up in the digital age and are typically aged 17-34), Stott has maximised the use of social media.

Big Cars has 255,000 followers on Facebook and the platform provides an influential channel when it comes to raising awareness of the company and highlighting offers. As an early adopter of Facebook in 2010, Big Cars was able to steal a march on other industries.

It was also able to consolidate its presence before Facebook introduced algorithms that reduced the appearance of businesses in newsfeeds. Even if Big Cars reaches only 10% of its fan base with a post, that’s still 25,000 people.

Stott said: “Facebook is a good lead generator. We promote our offers and there is always a lot of interest in the business. I think it helps that we are multi-branded, people are confident they will find something for them.”

On other social media platforms, the company has been quick to incorporate Twitter (15,700 followers) and Instagram (7,000 followers).

Stott also embraced the opportunity to appear on Channel 4’s Million Pound Motors programme. Big Cars is a sponsor of Chelmsford City Football Club and backs a number of other community-based sports clubs including mixed martial arts, boxing and cricket.

Stott believes investing time and money in his customers has put Big Cars firmly on the map. In early September, to launch its new Big Cars Direct brand, the company held an open weekend, with a barbecue, ice cream van, Formula 1 simulator and rodeo bull, which attracted 2,500 people.

The event cost about £30,000, but Stott’s team managed to sell 36 cars over the weekend. More importantly, a photographer was on hand to take photos of people in one of the company’s Lamborghini supercars. These were then emailed, branded with the Big Cars logo, providing an excellent data capture exercise.

Stott said: “You inevitably attract people who come down for a free burger, but we don’t have a problem with that because they will know someone who is in the market for a car and they will say good things about us.

“I would rather connect with people, it’s what we are about; we are a people company.”

Big Cars has been focused on the premium used car sector,  including supercars. Big Cars Direct is aimed at the volume market and sells cars from £5,000-£15,000. While vehicles are on display on the forecourt in Witham, Big Cars has teamed up with fleet and rental companies advertising their de-fleeted stock, providing access to about 3,000 vehicles that are typically less than four years old and most have low mileage.

With a new website launching at the end of this year, Big Cars Direct has its own identity while remaining under the established Big Cars banner.

Stott has turned his back on what he refers to as the “old style” of selling vehicles and instead ensures his customers are well looked after, which means they are more likely to recommend the business to their friends and family as well as return when it’s time to change their car.

However, his success is not just about being the nice guy. The behind-the-scenes operation at Big Cars is slick. Stott has a team of people who nurture the company’s leads, which usually come via telephone or as a web-generated enquiry form.

Response is quick and friendly and the team hands the leads over to the sales executive when they are ready to book a test drive. Another team provides an aftercare service once a customer has taken delivery of the car, checking they have received a high level of service and that they are genuinely happy customers.

“We look at what we can do to improve our performance by just a little bit each week. It’s not just sales, I meet with every department Adam Stott, managing director, Big Cars

“Being friendly is key, but we also marketed the business differently. I have imported a lot of the processes which I learned at BMW, but we are also fresh-thinking and I have taken on board approaches from other retail sectors.

“I look at what makes a business successful and try to replicate that here.

“We are not about a cheap sale, although offers are important to us. We want to add value to a customer’s car-buying experience so they tell their friends and come back. We have developed a reputation that we look after our clients and so people really want to bring their business to us.”

About 85% of Big Car’s customers finance their vehicle purchase, with a split of 60% opting for personal contract purchase (PCP) and 40% hire purchase (HP).

While the company utilises a range of financial providers, its main retail supplier is Barclays Partner Finance and it uses Alphera Financial Solutions’ stock funding product to purchase vehicles for its forecourts.

With finance forming a core part of its retail offering, Financial Conduct Authority (FCA) compliance is vital and Big Cars has been fully authorised.

“For us, the culture of treating customers fairly was already very much in place and it was more of a question of implementing processes to ensure we were fully compliant,” said Stott.

Stott had already employed business managers at both branches, both of whom also come from a BMW retail background, although he sees them more as providing a service to the customer, and compliance flows from that.

“They are in place to help our clients achieve the right offering at the right price using a product that best suits their needs and affordability. It isn’t the finance income that matters to us, but that the customer has been able to purchase the car they want with a finance product that’s fair with the best possible rate.”

The wider sales team has a variety of backgrounds; most have not been employed in car sales in the past and include mobile phone sales, a former estate agent and a parts adviser from an Audi dealership.

Stott, his operations and finance director Richard Hill, and the rest of the management team, which includes the business managers and sales managers at each site, all cut their teeth in the franchised sector.

However, Jack Isaacs, the Chelmsford branch sales controller, who sits between sales executive and sales manager, has been with the company for four-and-a-half years and is ‘home-grown’. Sales executives undergo an intensive  five-day training course, which includes the FCA compliance test, and are not permitted to sell a car for the first eight weeks of their employment.

A stringent monitoring system is in place whereby every call is recorded and listened to by an in-house team. Any issues are immediately flagged to senior management, who address it with the individual concerned.

The process not only ensures no phone call is left unreturned and no lead is forgotten, but makes everyone accountable and thereby delivers the high levels of customer service which Stott believes are the cornerstone of the company’s success. He extends the open, transparent and friendly attitude he has with customers to his staff.

The walls of Stott’s office are adorned with A3 sheets of paper – a giant timetable of weekly meetings, covering all aspects of the business and including all employees from accounts to marketing and sales.

“I call them improvement meetings,” said Stott. “We look at what we can do to improve our performance by just a little bit each week. It’s not just sales, I meet with every department and we come up with ways we can improve things.”

‘Everyone feels invested and involved in the business’

Stott incentivises all employees with quarterly competitions offering holiday destinations that have included Dubai, Las Vegas and the Bahamas as prizes. He also takes his staff on nights out to remember such as taking a box at the O2 to see Justin Timberlake and the Jingle Bell Ball.

“We look after our people,” said Stott. “All our employees brought their families along to our open day, everyone feels invested and involved in the business.”

Although it was named in the London Stock Exchange’s 2015 Directory of the Top 1000 Companies that Inspire as a direct result of its financial performance, Stott said the business would not have made the list were it not for the commitment of his employees.

It is perhaps this infectious mix of treating customers as friends, without appearing over the top or false, and ensuring employees are well rewarded, recognised and informed while all are fully accountable that has resulted in the company’s success. Add in Stott’s drive, single-mindedness and clarity of vision and it’s not surprising that Big Cars keeps getting bigger.