Is it time for more independents to look at aftersales? 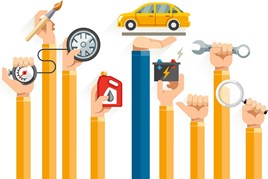 Although set-up costs would be high, for both equipment and technicians, investment in after-sales servicing could lead to high-margin servicing, maintenance and replacement work – but can the theory be easily put into practice?

“The aftersales market is always incredibly competitive, and the major franchised dealers are also making a very strong play for this type of business,” said ICDP senior researcher Peter Bailey. “The wider concern is that as competition increases further, it could become a race to the bottom, which would help no-one.”

He said a lot of independent used car dealers already have workshops, and are quite established in the provision of aftersales. Many others, especially those with large sites, effectively sub-contract their preparation and servicing needs to partner workshops in their area, rather than make the leap themselves.

“I’m sure some will try, but they’ll need land and workshops, and you’d be paying £25k-£30k just for the kit for one bay, so the costs would soon mount.

“Experience is another major issue. Most used car firms just want to turn over used cars, it’s what they know and they don’t want to get involved with a network of parts suppliers and the hassle of servicing. Perhaps an alliance of small used car operators might come together, to generate economies of scale, but it still wouldn’t be easy.”

Faced with a challenge in persuading potential customers to move away from their current repair and servicing provider, Bailey suggests picking a cluster of brands to specialise in. Targeting Volkswagen Group vehicles, or French marques, could be an advantage, particularly if a dealer also specialises in sales of the same brands.

“They aren’t franchised repair set-ups, but have the knowledge, contacts and expertise to deal with vehicles from particular marques.

”I do see more of the big used car supermarkets trying to get warranty work, and maybe also repair work. But even then it isn’t easy, because the franchised dealers are making an almighty effort to hold on to their warranty work.”

Offering servicing, MOT and repair work might strengthen the relationship between used car buyers, who are typically a fickle bunch, and their dealer.

However, at Manchester-based auto industry specialists ASE Global, chairman Mike Jones believes most used car dealers will steer clear of those options, however compelling the theory.

Although profit margins from service and repair can be healthy, Jones said the independent dealers’ business model doesn’t require them to begin offering aftersales and servicing. They will most likely have come through a sales career, have minimal (if any) experience of the aftersales sector, and prefer to stick to what they know, he said.

“Although the majority of the used-car operators already have the stuff they need to do rectification and pre-sales work on cars they sell, would they have sufficient capacity to move into servicing, MOT and repair?”

He said there’s a case to be made, especially for the major operators with large sites, that they should extract more value from their most expensive assets, such as land and buildings. There are signs already of some in the franchised sector deciding to offer servicing outside traditional hours, to meet demand.

“We’re seeing contact centres opening later, and of course, the truck and van sector has been operating multiple shifts for many years. Utilising your existing assets more often is logical, and I think more people will move toward this model, although the majority of used car operators will probably steer away from it.

“To be successful in the used car sector over a period of years, you have to be phenomenally good at what you do – and what you know. These operators would be exposed to greater risks if they moved into aftersales work, and they’re very aware of that issue.

“Another issue, which is crucial for customer retention, is the quality of the repair and servicing work. It was interesting to see Inchcape recently overhaul its structure for pay and employee benefits; partly to retain its existing 950 technicians and to attract 350 new ones, as there is a shortage of qualified technicians.

“If the giants of the industry need to revamp their pay and benefits, how difficult would it be for new entrants to aftersales to attract and retain the right calibre of technician?

“Overall, I do think some operators will decide to go into servicing, repairs and MOT work, but they’ll be the exception, rather than the rule.”

For the used car dealer with the investment, desire and space to extend their business model to include aftersales work, the rewards are not solely profit.

The more long term advantage is ensuring its customers are satisfied and come back regularly. Research from BCA’s Used Car Market Reports shows that less than one in four used car buyers returns to the same dealership when they subsequently change their car, so an opportunity to offer annual services and MOTs could give the independent dealer a chance to build a longer-lasting relationship.

One major regional brand which has expanded its model is Carbase, the largest independent used dealer in the South-West. Retailing from its main base at Bristol and three other sites, the ID50 group also has three auto centres which offer MOT, servicing and repairs to its customers, and any other owners of used cars.

The family-owned business is on course to retail more than 8,500 vehicles in 2017, and has 130 staff, so general manager Gordon Veale is well-placed to judge how satisfaction levels might be maintained, and enhanced, in a large operation.

“From our perspective, bringing in an external and independent agency to monitor what we do has been absolutely crucial,” he admits. “We brought in Judge Service three years ago, and because we wanted to promote ‘trust’ to our customers, we also decided to use the RAC as our servicing partner.

“When we we went to them, we realised we might get a bloody nose and we did, in some respects, but we learned from the comments and are now a better business because of it,” said Veale.

“Our satisfaction scores have risen steadily from the sub-90s, and at the moment we’re running between 96% and 97%, but that doesn’t mean we’ll stop trying to improve.”

In a marketplace where staff in sales and aftersales roles are quite transient, implementing new measures has to be done carefully.

Veale said: “We didn’t use the Judge Service data to ‘beat people’, but stressed from the start that they were there to help us improve. We now have a league table for all our staff and have learned a great deal about ourselves. We can dig down through the branch analysis, even to individual people, and the language they use and the questions they ask.

“We also record all conversations between our staff and customers, and everyone knows the monitoring is in place, so it’s an extremely transparent process.”

Some of the improvements have been small, but Veale said others have been dramatic.

“We don’t use ‘scripts’ at our contact centre, we just give staff bullet points,” he says. “We also talk to every customer about their experience, and that is then followed up by a phone call.

“At Bristol, we had a waiting area where people just milled around, but now we have machines for coffee, water and sweets, and lots of seats. It really makes a difference to the overall experience.

“But the biggest change was to publish all our customer reviews online. We explained to all the staff that it was intended to improve our standards, and they took it in a positive way.

“It’s about learning and getting better, and the benefits can be seen in the satisfaction levels.”