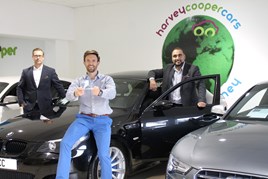 The business, which was set up in 2013, beat hundreds of entrants to take the Family Business of the Year award at the event designed to showcase the best in UK business.

An off-shoot of the luxury, 4x4 and sports car specialist Alexanders Prestige, the dealership is named after its two founders' sons, Harvey and Cooper, and run by a close-knit team of ten.

Managing director Andrew North said: “SMEs are the backbone of the UK economy and we’re thrilled to have won this award.

“The business only launched three years ago and in this short space of time we've strived to offer the best possible customer service. It's this service that's earned us this accolade and it’s a well-deserved pat on the back for the team.”

According to government figures, small and medium sized enterprises employ 14.4m people and account for 99.9% of all private sector business in the UK, generating a combined £1.6 trillion in income.