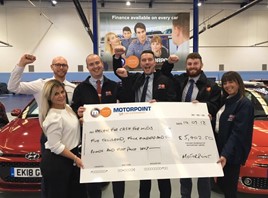 Motorpoint brought the silver screen into its car showroom in Sheffield and succeeded in raising £5,400 for Bauer Radio’s Cash For Kids charity organisation.

The car supermarket, at the city’s Europe Link trading estate, teamed up with Sheffield’s Urban Entertainment to put on a special sell-out screening of ‘Grease’ in aid of the popular charity which operates across 22 areas around the UK.

Film lovers flocked to Motorpoint’s screening – with 600 visitors contributing to the £5,402.50 fibnal charity tally on the night – and food and drink was provided by Sheffield-based Bear’s Street Food.

Chris Goodison, general manager of Motorpoint in Sheffield, said: “It was fantastic to see so many people having a wonderful time at Motorpoint.

“And the best thing about it was that collectively we helped raise a huge amount of money for our charitable partner - Cash for Kids.”

“It was a huge success and the money it has generated will help make a big difference to the lives of children up the age of 18 who are either sick, deprived or in need of extra support.”

Motorpoint Sheffield adopted Cash for Kids last year following the opening of the seven acre branch in April 2017. To date, it has helped raise over £10,000 for its charitable partner.