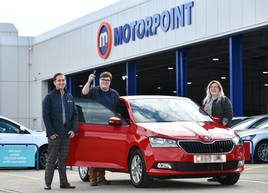 Motorpoint has handed over a used car to the first person to benefit from Birmingham City Council’s new Clean Air Zone Vehicle Scrappage and Travel Scheme.

Motorpoint is the sole car retail partner of a newly-launched £10 million scheme, which was officially launched by Birmingham City Council on May 12 to combat CO2 emissions in the city.

The scheme will hand motorists who work in the city centre for at least 18 hours a week and earn less than £30,000-per-year, £2,000 towards transport credits or a newer car from the used car supermarket’s retail sites in Aston and Oldbury.

An employee of the Faculty of Arts, Design and Media at Birmingham City University, Crowther traded in his 14-year-old Nissan Note for a Skoda Fabia with the help of the scheme.

The 29-year-old said: “I’ve had my Nissan Note for about five years, during which time I’ve done over 100,000 miles with work, firstly with BBC WM and then, more recently, 5 Live in Salford.

“However, it was getting close to its MOT and I knew I would have to spend a lot of money to get it to pass, and I didn’t think it was worth it given its value.

“Then I heard about the scheme and I would be lying if I said that the £2,000 credit towards a new car wasn’t a factor in deciding to change now as it has really helped in terms of affordability.”

Crowther said that his new Skoda would be the first car he had ever bought from a dealer.

Kevin Cartwright, the general manager of Motorpoint’s Aston and Oldbury car supermarket sites, said: “We’re delighted to see our first customer drive off the forecourt in their new car through the Clean Air Zone Vehicle Scrappage and Travel Scheme.”

Earlier this month AM asked Birmingham City Council why a single car retail provider had been identified as a partner for its emissions-cutting clean air scheme.

It said: “"We undertook a full and thorough tender scoring process when considering a partner for the Vehicle Scrappage and Travel Scheme, which Motorpoint were successful in.

"All of the cars sold by Motorpoint are compliant with the Clean Air Zone emission standards."

Toyota, Kia and Mazda are among new car franchised networks currently operating their own scrappage schemes, delivering savings of up to £4,000 off new, low emission vehicles.

Miliband also suggested that a new national scrappage scheme should be introduced as part of efforts to deliver on the UK’s ambitious Road to Zero plan to reduce CO2 emissions, claiming that Government was currently “asleep at the wheel” in its facilitation of the shift to EVs.