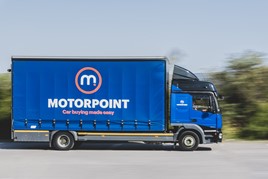 Motorpoint has revealed that it sold 61% of its used car volume online in Q1 as it accelerated its ecommerce retail offering to deliver a record start to 2021.

Mark Morris, chairman of what is the UK’s largest used car supermarket group by turnover, will reveal that its board of directors “continues to look to the future with confidence” after reporting its strong performance to shareholders at an AGM meeting this morning (July 27).

The PLC enjoyed record sales in the first two months of the financial year, both online and in branch, which were “significantly ahead of the same period in FY20” – the year prior to the COVID-19 pandemic.

It said that reduced supply of vehicles – driven by the fall in new car production – contributed to a moderation of revenues during June, and into July, but added: “Throughout the first quarter, gross profit margins remained strong due to appreciation of vehicle values, and trading is in line with the board’s expectations for the full year.”

Volumes on Auction4Cars.com, our purely online wholesale platform, were significantly ahead of FY20, with record margins, it added.

In a set of annual financial results published last month Motorpoint revealed a new “mid-term strategy” which aims to almost treble its revenues to £2 billion.

The group said that it would add 12 new sales and collection branches to its recently-expanded 14-site network, substantially increase investment in marketing, technology and data and leverage its Auction4Cars.com platform to accommodate new supply channels and launch a new “marketplace offering”.

In today’s update Morris will tell shareholders that the group has continued to increase its investment in technology and marketing and launched the Motorpoint car buying service on July 6 in a bid to increase the supply of retail vehicles and the volume of transactions on Auction4Cars.com.

“Several more branches are under negotiation and are expected to be acquired during 2021.”

Alongside Motorpoint's planned expansion of its retail sites, last month the business revealed its plan to create an eight-acre used car preparation centre in Motherwell as part of its "ambitious" growth plans in Scotland – creating around a dozen new jobs.

Today's statement from Motorpoint said that, while “some uncertainty persists” as a result of vehicle supply shortages, potential COVID-19 disruption and a realignment of used vehicle margins it was “well placed to deal with any potential headwinds”.

It added: “The board continues to look to the future with confidence, as the Group continues its exciting transformation into an E-commerce led business with huge potential.”