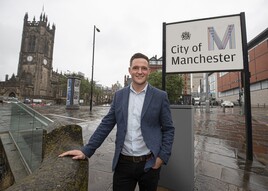 Last month the UK’s largest independent used car retail group revealed its plans to near-treble revenues to £2bn in a “medium term” strategy which would involve the opening of 12 new sales and collection branches, on top of the recently expanded 14-site network.

Today (July 14) it revealed that it would be opening the doors to a new two-and-half-acre site on Ashton Old Road, Manchester, on October 1.

The branch, which will be led by Jordan Dean, head of retail operations for the North West.

Dean said: “We’re absolutely thrilled to be bringing the Motorpoint brand to Manchester this October and look forward to building on our existing customer base in the city as well giving other car buyers the chance to experience for themselves our award-winning combination of choice, value, service and quality in person.”

Motorpoint said its new Manchester facility would have capacity for 200 low mileage, nearly new cars and light commercial vehicles from 30 different manufacturers, all under four years old and with less than 30,000 miles.

Motorpoint ranked as automotive sector’s Top Company to Work for

Motorpoint ranked as automotive sector’s Top Company to Work for