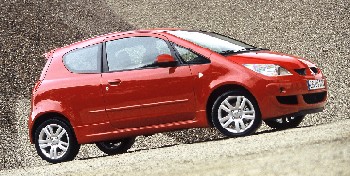 Mitsubishi Motors has released the first picture of its top of the range 150bhp Colt from the all-new 3-door Colt CZ3 range. Due to go on sale early 2005 the Colt CZ3 range will include the Colt CZT turbo charged variant.

The Colt CZ3 range will be available early 2005 with either a 5 speed manual gearbox or the Allshift automated manual transmission coupled with a choice of four engines: 1.1 litre 75bhp, 1.3 litre 95bhp, 1.5 litre 109bhp petrol engine and 1.5 95bhp direct injection diesel.

At the same time, the new 3-door Colt will be available in the "Colt CZT" variant, exclusively offered with a turbo-charged version of Mitsubishi Motors´ MIVEC Turbo DOHC 16 valve intercooled 1.5 litre engine, developing 150bhp, with a 0-62 time of 8 seconds and a top speed of 130mph. The Colt CZT will make its world premier at the Paris Motor Show in September.