Was this article useful?
Click the thumbs up >
Car registrations have fallen by 10.8% in October to 152,497 units.

October figures were down 5.6% at 2,124,377 units, according to figures from the Society of Motor Manufacturers and Traders.

Diesel penetration was at a record 39.9%, but had its first fall in terms of volumes in 61 months. October saw a further fall in supermini volumes, down 17.5% in the month and 12.2% over the year-to-date. The Renault Clio and Fiat Punto saw some of the sharpest falls, although new versions of both are due to be launched in the next few months.

The Ford Focus remains the UK's number one best-selling model. The Vauxhall Astra and Renault Mégane in second and third spots mean all of the top three places in October were lower medium cars.

SMMT chief executive, Christopher Macgowan, said: “2005 has been a tough year for the new car market.

“The downturn in consumer spending has hit dealerships across the country. The good news for buyers is that a weak market means strong deals. The next few months will also see a range of new models, especially in the popular supermini segment.

“Manufacturers and dealers will continue to fight hard for every sale.” 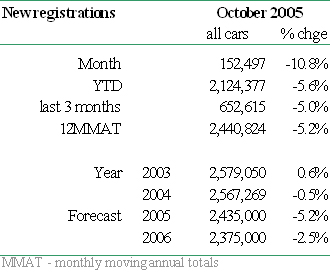 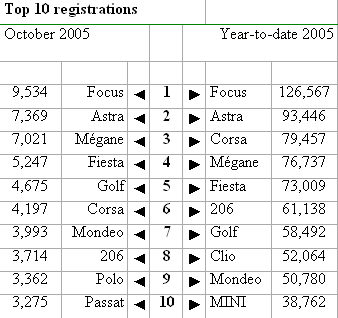 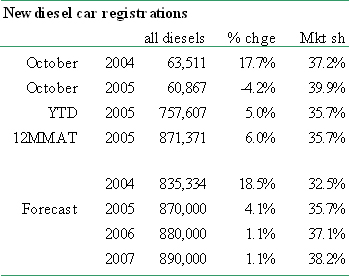