Was this article useful?
Click the thumbs up >
Renrod has officially unveiled three of its new dealerships, which all opened this month, at their purpose built motor park in Trowbridge.

The new site includes dealerships for Renault, Vauxhall and Toyota. Each dealership celebrated their openings in turn.

Joining the celebrations for Platinum Renault was the mayor of Trowbridge and a Caribbean steel orchestra. The long weekend of entertainment included rides on a F1 simulator, a children’s entertainer and a tour of the workshop. It also coincided with the launch of the new Renault Laguna, available for test drives.

During the Platinum Vauxhall weekend, customers were able to tour the facilities and test drive the new Astra Sport Hatch.

The Platinum Toyota weekend saw customers invited to a “ride & drive” event in which they could test drive any new Toyota.

All visitors were entered into a free prize draw with the winner choosing from its range to drive for a week. Runners up will also win tickets to the British F1 Grand Prix at Silverstone and Toyota F1 merchandise. 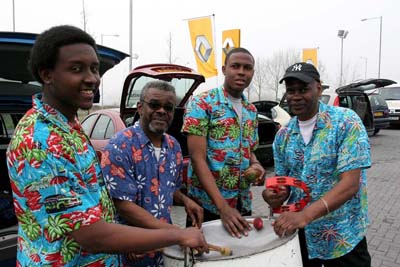 The Caribbean steel orchestra at the Platinum Renault celebrations