Was this article useful?
Click the thumbs up >
Toyota’s Corolla replacement, the new Auris, has achieved a five star rating for adult occupant protection from Euro NCAP.

But two other vehicles in the latest round of tests have peformed appallingly, according to Euro NCAP.

The Auris is on sale in the UK from February 1. 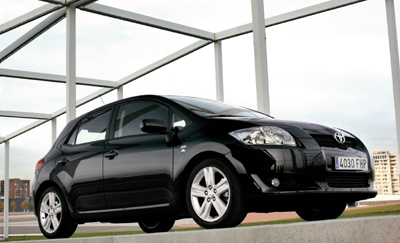 Other cars tested were the Hyundai Santa Fe, Kia Magentis and Skoda Roomster. The Roomster, was awarded a five star rating for adult occupant protection. The Magentis and the Sante Fe are both awarded four stars.

Despite the Skoda’s excellent five star adult occupant rating, Euro NCAP’s tests identified a weakness in the Roomster. Main battery power cables are vulnerable to damage as they are routed down the front of the battery.

In the frontal crash test, these cables were damaged resulting in a loss of electrical power. As a consequence, the seat belt pretensioners failed to fire.

Skoda proposed the fitment of reinforced sleeves over the cables to protect the cables. They also proposed a modification that maintained sufficient electrical supply to fire the pretensioners, even if the cables were damaged.

In a retest, the cable protection was found to be inadequate with some cables again being damaged. However, the other modifications did ensure that the seat belt pretensioners operated correctly.

Euro NCAP asked if Skoda planned to modify cars already sold but was disappointed to learn that there are no plans to do this. Skoda has applied the modifications to vehicles from VIN number TMBVCB5J875025783.

The Hyundai Santa Fe is given a zero-star rating for its pedestrian protection after failing to score a single point. The Kia Magentis also does 'extremely badly', scoring only three points for a one-star rating.

Tingvall said: "These are appalling results from these two Korean manufacturers. It has taken the car industry a long time to address the issue of pedestrian safety but several manufacturers are now making improvements and the Toyota Auris joins a growing list of three star cars. For the Santa Fe not to score a single point shows that Hyundai have made no effort whatever to protect pedestrians and reflects a worrying disregard for the safety of this important group of road-users. Manufacturers like Hyundai and Kia are now a long way behind the front-runners and it is high time that they realise that such poor results are unacceptable."

AM Poll
How has the COVID-19 pandemic affected your attitude or mental health? Please leave a comment
Vote
View all
2493