Was this article useful?
Click the thumbs up >
Both the SMMT and RMIF talk about the “excellent deals” that were available in March, which underlines just how fierce the market was in what most assume will turn out to be the year’s best month.

It took an almighty shove – manufacturers were registering up to 25% of their month’s total in the final three days – to get the market up to 435,847. That was well short of the 450,000 that appeared to be the industry’s target.

Registrations last month were 1.6% down year-on-year. This followed a disappointing January and February, when, as the SMMT said, “all eyes are on March”, and the first-quarter sales performance was a worrying 4.6% lower than in 2005.

There are no excuses, and no one is really to blame apart from, perhaps, Chancellor Gordon Brown. The problem lies with the slowdown in the economy and rising costs (especially fuel and taxes), which have combined to make retail buyers reluctant to buy new cars.

Manufacturers did their best, with a wide range of marketing initiatives and financial help, such as 0% finance packages.

Dealers were offered bonuses by taking packs of cars including slow sellers. Consumers were perhaps more in the driving seat than ever before, which was why the retail market managed its first increase in 24 months – 0.2%, or 483 units.

Sue Robinson, director of the RMIF’s National Franchised Dealers’ Association, agrees: “Value for money and excellent deals for the private buyer provide the key message from the figures.”

Christopher Macgowan, SMMT chief executive, says: “The lure of the ’06 registration plate and some excellent deals on forecourts has seen new car buyers heading back to dealerships.”

But Macgowan adds: “A reasonable March cannot mask the poor start to the year, and 2006 will continue to be a challenge for the industry.”

The SMMT expresses disappointment in the Chancellor: “It had been hoped that Mr Brown’s 10th Budget might have contained measures to reignite consumer confidence and restore growth to retail sales. But the early signs suggest the measures have had little positive impact.”

With so much hanging on March, the performance of individual carmakers demands scrutiny and, among the majors, Renault stands out with an 11.36% drop (27,551/6.32%, against 31,082/7.02% in March 2005). A Renault UK spokesman says: “We were happy with what we did, and hit our sales target, though maybe the market was a little higher than expected.

“Others were pushing harder at the end of the month, but we stuck to the commitment announced by Carlos Ghosn that Renault would not trade unprofitably.”

Highs and lows for manufacturers

Citroën was down 4.3% but, says a spokesman, LCV sales account for more than 20% of its total, and when taken together the total was close to March 2005.

Isuzu has a zero tally this year because the Trooper has ceased production and the manufacturer now builds only trucks and LCVs. Its Rodeo pick-up is the only model sold in the UK.

Peugeot, which last year tumbled 14% compared with 2004’s registrations, shows signs of a recovery, with a first-quarter rise of 1.61%. But it faltered in March, with a 2.61% decline, which was higher than the market average.

Proton will continue until June 30 with a £1 deposit promotion that in March brought about a 75% rise year-on-year. The figures are small (536 against 307) but this was the first cheering news for its dealers after a long difficult period.

One Proton dealer says: “The new Savvy helped us to win conquest sales and the network did well considering we are dependent on retail registrations.” 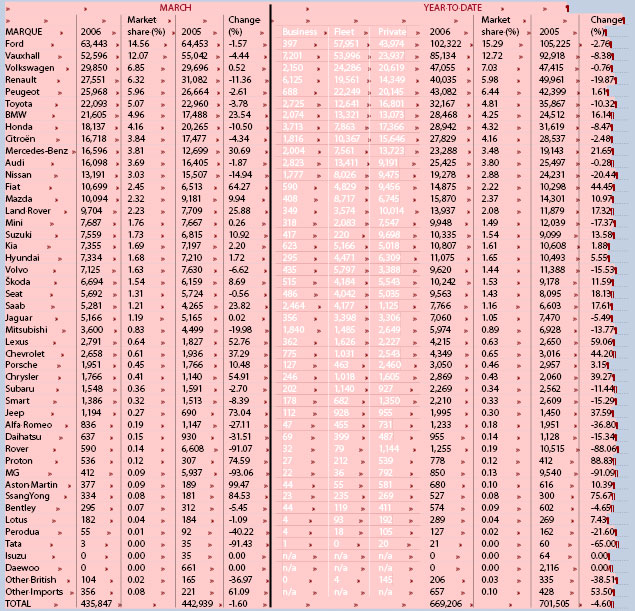