Was this article useful?
Click the thumbs up >
Born, bred and proud to be British: that’s the attitude that Triumph has built its reputation on and it is an ethos that has been exported around the world.

Iconic images don’t come any stronger than Marlon Brando in The Wild One (the Triumph that Brando rides in the movie was his personal bike), or Steve McQueen jumping barbed wire fences in The Great Escape. And the bike? A Triumph – McQueen’s motorcycle of choice.

In the Fifties and Sixties, Triumph, along with names such as Norton, Royal Enfield and BSA, dominated the motorcycle market in the UK and abroad. But by the early Seventies, the company was struggling as the likes of Honda and Yamaha took over with hi-tech machines at competitive prices, and in 1983 the company went into liquidation.

It was then bought by John Bloor, the boss of Derbyshire-based Bloor Homes, who developed a new range of Triumph motorcycles in secret before launching them. It took eight years to create a range of six roadsters, which could use many of the same components and had the same styling features – all major cost savers.

At the heart of the company’s philosophy remains a firm commitment to developing truly unique motorcycles that are distinctive in looks, design and performance. The Rocket III has been described by The Independent as the ‘Sophie Dahl’ of bikes and in last year’s MCN awards the same bike won Cruiser of the Year. Triumph also won Super Street Bike of the Year with the Speed Triple, thanks to its “radical design and incredible looks”.

But Triumph isn’t just about the metal, it’s about the brand image. In 2004 it was named as British Brand of the Year, joining the likes of Land Rover and Burberry.

The manufacturer has made a commitment to produce two new models per year and its plant in Hinckley, Leicestershire, produces 200 bikes a day, with production expected to increase by 20% this year.

The current line-up has 16 models and last year the Sprint ST 1050 sports tourer was the top bike. This year, Triumph expects the Dayton 675 Triple sports to lead the way as it aims for an increase in sales from around 5,700 to 6,300 bikes.

“Not one bike manufacturer can match the wide range we make under one brand. When we come out with something new, people don’t question it – we are one of the few players who can do that,” says Burrows. 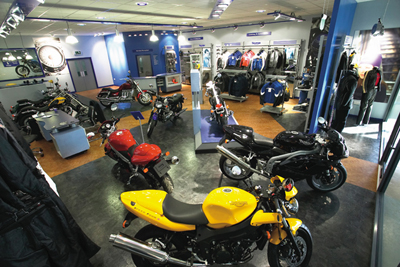 Bikes share floorspace with merchandise, which is only available from dealerships

Triumph is committed to producing two new models per year

The company has decided to go for a tight network of 57 points, which it believes allows it to service its customers well and it is aiming for a further two by the end of the year, with east London, Manchester, east Birmingham and Reading being the main locations. Overall dealer margins per unit sold average around 12% and dealers are expected to sell 120 bikes each this year.

“We have a rapid decision process on any level, even dealer level. We listen and our dealers can always get through to us. It would be easy to put dealers everywhere but that is just mortgaging the future,” says Burrows.

At the moment, just under 50% of the network is solus and it is encouraging its retailers to follow this route. But with a product that is in such strong demand, Triumph is able to be selective about potential dealers.

“They need to have the right mentality to sell bikes and they need the enthusiasm and passion. The customer will know as much as the dealer about the bike they want, so the dealer needs to know more. The most successful dealers know bikes and love bikes,” says Burrows.

The dealership environment is important to Triumph. While the bikes take centre stage, the display of clothes and accessories is vital and the showroom is built around all these elements.

Official clothing is only available from Triumph dealers, so it’s an important revenue stream. “A bike customer is very different to a car customer as you will see them maybe 20 or 30 times a year. They don’t just buy a bike, they buy the extras, too. We have a loyalty as strong as BMW or Harley, repeat business is very strong and we have owners who are on their seventh or eighth Triumph,” he adds.

#AM_ART_SPLIT# The latest models from Triumph 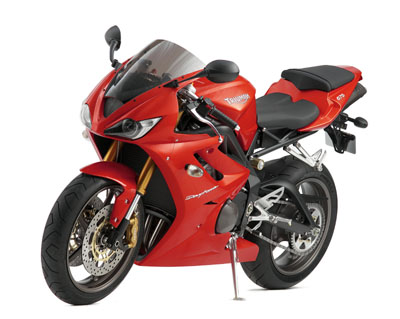 One of the most eagerly awaited bikes of the year, the triple-cylinder Daytona 675 packs a large amount of power and torque into a small, nimble package. The 12-valve engine features a stacked, close-ratio, six-speed gearbox, Keihin closed-loop fuel-injection system and a free-flowing exhaust with an underseat silencer. 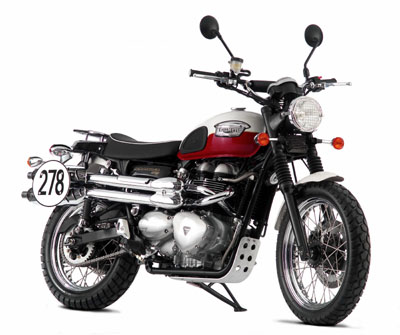 The twin-cylinder scrambler adds a new twist to the Modern Classics range. A fresh take on Triumph’s past, the Scrambler is a redefinition of the bikes made famous by Sixties icons such as Steve McQueen into a contemporary urban context. Described as a ‘do anything, go anywhere’ machine, it has been developed to be easy and unintimidating to ride. 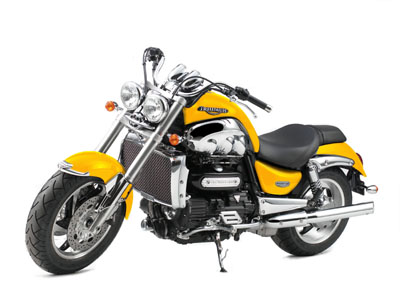 While the original model has won the hearts of the power-cruiser crowd, the Rocket III Classic is aimed squarely at those who favour a more relaxed approach to riding. Firmly focused on rider and pillion comfort, it comes with rider footboards, pull-back bars and a stitched touring seat as standard to add to its long haul abilities.