Was this article useful?
Click the thumbs up >
London dealers are being sought to market the Maranello4, the latest electric micro-car aimed at beating pollution, congestion and parking charges, and the high cost of fuel.

UK importer Sakura Battery Co Ltd, wants four dealers in the capital to sell the two-seaters, which retail at £9,995 and measure less than 9ft long and 5ft wide.

Sakura believes the high cost of the vehicle could be recouped within a year by London commuters, who could escape daily congestion and parking charges.

“The Maranello4 makes sense if you’re commuting into a city like London on a daily basis. Parking in the City and Westminster zones is free of charge and you don’t have to pay the congestion charge, either,” says Sakura’s Dan Hornby.

“There’s no road tax and insurance is cheap; it could be possible to save £8,000 a year. And there’ll still be residual value to be recouped when the vehicle is sold.”

Sakura hopes to sell 100 vehicles this year, once its small dealer network has been established, rising to 400-500 units in 2007. But dealers will have to work hard for their cut with margins currently just 7%.

Hornby hopes to be able to offer bigger margins as sales volume increases. He anticipates that retail price will remain high because of the Maranello4’s potential to minimize ownership and running costs.

A hybrid electric/petrol, 500cc twin-cylinder version, top speed 50mph, will also come to the UK in September priced around £11,000. 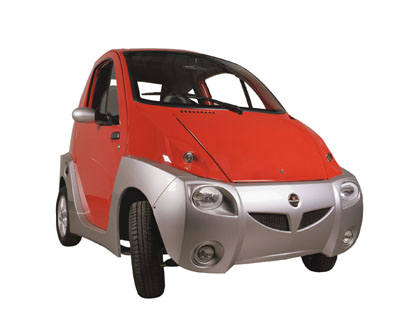