Was this article useful?
Click the thumbs up >
February new car registrations were down 3.2% (2,410 units) to 73,586 units compared to the same month last year.

“February is traditionally a slow month as new car buyers and the motor industry prepare for the surge that accompanies the March plate change.

“We expect to see registrations of new cars next month total around 425,000 units, worth some £6 billion,” said Society of Motor Manufacturers and Traders chief executive, Christopher Macgowan.

February, being such a low volume month, often throws up unusual results. However, the top 10 best sellers in 2007 were fairly predictable. The Ford Focus remained at number one, ahead of the Vauxhall Astra. Peugeot had two models in the top 10, Ford and Vauxhall three apiece.

'Since the twice-yearly plate change system came into effect in 1999, the new car market has experienced its highest demand in March. Despite continuing pressures on the pocket, having shaken off the financial hangovers of Christmas and New Year celebrations, many motorists should be keen to take advantage of competitive forecourt deals. This should ensure another registration peak in March,” he added.

Sue Robinson, director if the RMI national franchised dealers association (NFDA), said 2007 would be a tough trading year compared to 2006.

“Retailers have foreseen these problems and are adjusting their business plans for the year accordingly, but there are still many excellent deals available in showrooms,” said Robinson. 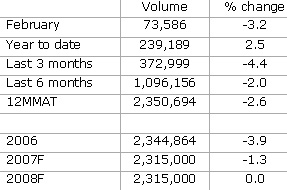 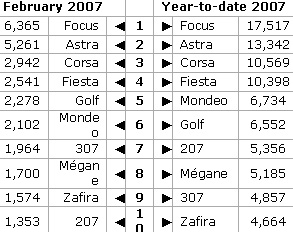