Was this article useful?
Click the thumbs up >
Nissan’s facelifted 350Z coupe and roadster will be priced at £26,795 and £28,295 on-the-road respectively when they go on sale next month.

Prices have been raised by £300 over the previous models. This also includes the recently announced rise in road tax (up £90) and the first registration fee (up £12).

These changes allow performance figures to improve with 0.1 of a second shaved off the 0-62mph time which means the coupe now takes 5.7 seconds and the roadster 6.1.

There is no change to the combined fuel consumption figure or the carbon dioxide emissions; 24.1mpg and 280g/km respectively for the coupe and 23.5mpg and 288g/km for the roadster. 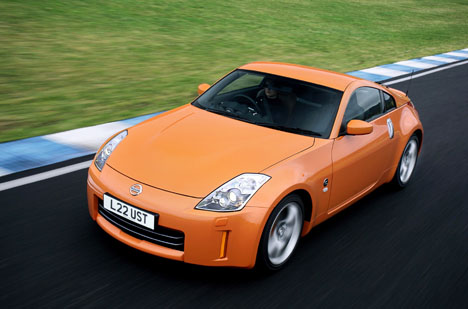 Inside, a new no cost option trim has been introduced called frost. On the Roadster the frost trim can be ordered with a new grey coloured roof hood, also at no extra cost, replacing the previous availability of blue.

Active headrests, Bridgestone Potenza RE050A tyres and an illuminated ignition switch is the only other change made to the facelifted 350Zs with all other levels of equipment remaining unchanged.

Both 350Z Coupe and 350Z Roadster models have a 12 months’/9,000 mile service interval and are covered by a three-year/60,000 mile warranty. There’s also a six-year anti-perforation warranty.