UK car production down in March

Production year-to-date was also down by 7.7% to 377,875 units, according to the latest figure from the Society of Motor Manufacturers and Traders.

However, Chris Macgowan, SMMT chief executive, said there was a lot to remain positive about.

“The recent announcement that the new generation Vauxhall Astra will be made at Ellesmere Port on Merseyside from 2010 is further recognition of the skills and efficiency of the British car worker.

“So, although total car production for March was down, we should remind ourselves that a number of manufacturers have seen positive growth during the first quarter of 2007 and that the long term prosperity for car manufacturing remains positive,” said Macgowan. 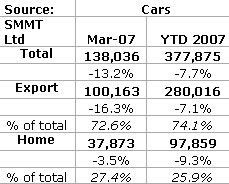