Was this article useful?
Click the thumbs up >
The Mini was the UK’s slowest depreciating car in 2007, according to Parker’s annual depreciation report.

Parker’s compared last January’s new prices with what an owner can expect if they sell privately now. It found that buyers that got their hands on a Mini this time last year will now have lost an average of just £1,388, or £27 a week.

This year’s runner-up, the Honda Jazz, is set to be replaced by a new model in 2008, but that hasn't stopped values remaining consistently high. The Jazz is the only car to have featured in the top five of Parker’s annual depreciation report every year since its launch in 2002. It lost an average of just £2,017 during 2007.

Small cars are more popular than ever and, for the first time, they make up the entire top 10. 2007 saw buying habits continue to change towards smaller and more efficient cars. There’s now an increased demand for cars that are cleaner and more fuel efficient – to counteract sharp rises in the cost of fuel over the last 12 months and to make savings on road tax.

The Citroën C1/Toyota Aygo/Peugeot 107 trio – essentially the same car with different badges – make up three of the top 10 places.

Other cars taking this year’s top spots – such as the Perodua Kelisa, Proton Satria Neo and Hyundai Amica – may not be household names, but are well equipped, cheap to buy and easy to own. But they’re not around in great numbers, which means there’s sufficient demand to keep the values high.

Kieren Puffett, editor of Parker’s, said: “This may be the first time that small cars have taken the top 10 places in our depreciation report, but it shouldn’t come as a surprise. Demand for small cars has never been stronger. Now that buyers can bring their annual road tax bill right down to nothing and with a CO2-based London congestion charge on the cards for next year, we can only see it getting stronger.”

The best performers of 2007 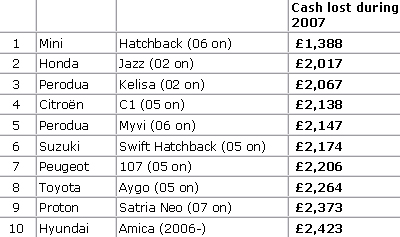 The worst performers of 2007 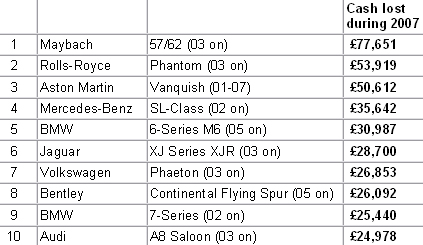