Chancellor Alistair Darling has announced VAT will be temporarily cut to 15% from December 1.

He urges retailers to pass on the reduction promptly, to encourage consumer spending.

However, he is also implementing a 0.5% increase in National Insurance, plus a new 45% income tax rate for people earning more than £150,000 annually from 2011.

Alcohol, tobacco and petrol taxes will be raised to offset the VAT reduction, which lasts until the end of 2009, he says.

Radical reform of Vehicle Excise Duty from next year has been delayed by the Chancellor because of the economic crisis.

Instead of VED increases next April of up to £230, the rises will be capped at £5 for the most polluting cars. And VED rises from April 1, 2010 will be capped at £30, although the Government will press ahead with the introduction of a new ‘first year’ rate.

In announcing the U-turn, the Chancellor said: “We rightly have a system of car taxation which takes into account the environmental impact from different types of car. As planned, differential first year rates which people pay when they buy a new car will be introduced in April 2010. They provide powerful incentives to purchase less polluting cars.

“I intend to go ahead with the introduction of new bands, reflecting fuel efficiency. But it would be wrong to do this in a way that places undue burdens on motorists at this time. So I have decided to help people by phasing in new rates and lower increases."

Cars registered before 2001, which account for around a third of the fleet, are not subject to the reforms, because comprehensive data on their carbon dioxide emissions is not available. Instead, pre-2001 cars are subject to a separate VED regime, based on engine size.

Paul Everitt, Society of Motor Manufacturers and Traders chief executive, said: “The 2.5% cut in VAT combined with the recent cuts in interest rates will encourage consumer spending, impacting on both the new and used vehicle markets. Any move to boost responsible spending is welcome but specific action to improve the affordability and accessibility of credit is needed if the vehicle market is really going to benefit.

“Now is not the time to be increasing motoring taxes so the scrapping of penal increases to VED is welcome. We are disappointed the chancellor hasn’t taken the opportunity to reverse his plans for a first year rate of VED and would urge Government to reconsider its approach to vehicle taxation policy, aligning it to EU CO2 legislation and providing a more consistent and long-term framework."

The SMMT reiterated its call for the Government to implement a package of measures to bridge short-term cash flow problems created by the banking crisis.

Everitt said: “The motor industry faces a set of unprecedented market conditions. The dramatic fall in demand for new vehicles around the world, combined with the limited availability of funding and liquidity now puts at risk valuable industrial capability. Urgent action is required to boost demand for new vehicles and ease pressure on UK automotive suppliers."

“Significant is the plan to delay the rises in VED to 2010 and to reduce the size of the increases when they are introduced. This was always a blunt instrument to tackle green issues.

"However, the threat of the VED rise has hung over the retail motor sector throughout this year. When we questioned more than 3,000 motorists earlier this year as part of the BCA Used Car Market Report we asked them about the effect of the Government’s planned changes in vehicle excise duty on their car buying plans. Worryingly 16% said they would consider buying used rather than new next time as a result of the planned changes.

“Hopefully this u-turn by Darling, combined with greater flexibility from the lenders, will see some renewed confidence in new car sales and a knock-on pull-through to used car sales too.”

Sue Robinson, Retial Motor Industry Federation director ,said:  "Delaying the introduction of changes to VED, and reducing the planned increases should reduce the burden on the motorist, and give the car market more time to adjust to the planned changes.

"The reduction in VAT means that car prices will fall, and could encourage consumers to return to showrooms. The VAT drop will also have an impact on the prices of thousands of other consumer goods and services, leaving cash-strapped households with more money to spend. This will help to restore consumer confidence, which is key to the revival of the overall economy."

Ray Holloway, director of the RMI Petrol Retailers Association (PRA), said: "The Chancellor’s good intentions are shown to be rather thin, through his plan to increase fuel duty to make up for the loss in VAT income from motor fuels. Some of the benefits motorists gained as fuel prices dropped following 2008’s record high fuel prices will now be lost. Motorists will have less money to spend elsewhere in the economy. The move will also have a negative impact on the UK’s hard-pressed fuel retailers, who also benefit when fuel prices are lower."

Darling also says small businesses will have a temporary increase in tax relief thresholds for empty properties. From today, businesses in difficulty will be able to spread out the payments.

From April 2010, in order for the new bands to “create an environmental incentive”, the Government will start to separate out the 13 differential rates.

This will mean that they maintain their exemption from the top rate of VED.

When the Government introduces first-year rates for newly purchased cars in 2010, new cars under 130 g/km will pay no VED at all in the first year of use, whereas the very highest emitting cars will pay £950.

The rates are outlined in the tables below. 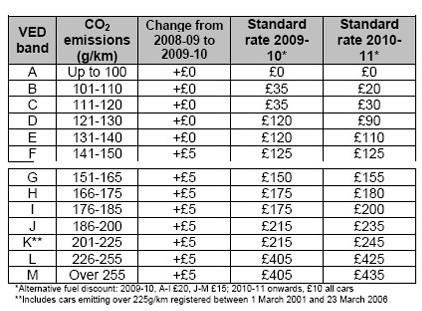 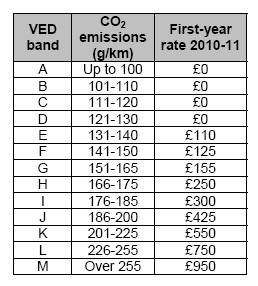