Was this article useful?
Click the thumbs up >
Honda has invested £22 million in its Swindon factory which has also rolled out its two millionth vehicle.

The cash injection is part of an £80m investment plan in the plant’s future and will allow Honda to meet 60% of required European sales from its factories with help from its other European factory in Turkey.

Honda said output in Turkey, which builds the four-door Civic only - has just been doubled to 50,000 and could be doubled again.

Maximum capacity at Swindon, which employs 4,200, is 250,000 vehicles a year and the plant exports to 60 different countries.

The plant has shown a 25% increase in production volume over the last 18 months, with the company's UK sales operation breaking through the 100,000 sales barrier for the first time in 2007. 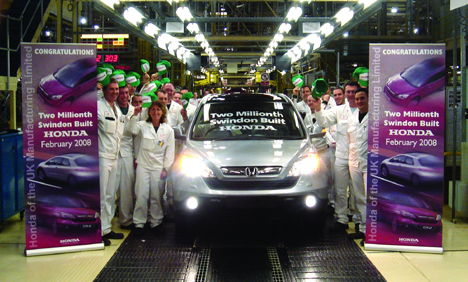