Was this article useful?
Click the thumbs up >
Kia Motors has confirmed that its new production car which has evolved from the Soul concept, will keep the name when it goes on sale in the UK next year.

The Soul evolved from several concept cars which were first shown at the Detroit Motor Show in 2006 and then the Geneva Motor Show this March.

Hyoung-Keun Lee, senior executive vice president and COO, international business division, Kia Motors Corporation, said: “Reaction from the media and public to the three Soul concept cars seen at the Geneva Show in March and shown subsequently at other international events, has been overwhelmingly positive.

“The Soul concept cars are so closely related to the new Soul production car that it made sense to retain the name.”

The new model will be the first Kia that isn't a replacement for a previous car in the range. From the first picture of the production version, the Soul could be likened in size to Skoda’s Roomster.

Production of the Soul will begin in Korea in September with UK cars appearing in early 2009.

Kia will be focussing on customisability with the production version of the Soul with the opportunity for customers to individualise certain features of the car to suit their own personality.

The production version will be on display at the Paris Motor Show in October. 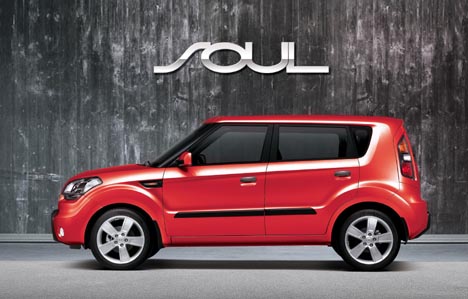