Used demand for Volkswagen, Mercedes-Benz, Honda and BMW models has risen year-on-year in the first quarter for the past three years.

They have encouraged dealers to focus more on used cars.

Citroën has seen a recovery this year although first quarter new sales were down 11%.

No surprise that Rover is the big loser with its ageing parc. 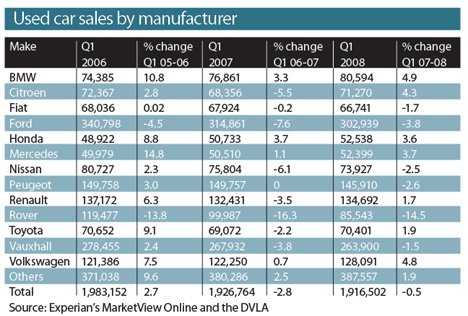 Total used car sales have fallen for the second consecutive quarter one.

Just one age category is up, six to nine-year-olds.

The sub three-year-old category, the one most influenced by new car sales driving part-exchanges, has fallen the most.

It is now a smaller category in sales volume terms than the three to six-year-old sector.

Diesel sales rose in quarter one, but are widely tipped to fall later in the year as fuel costs continue to spiral.

The big growth areas – although volumes are still small – are electric and petrol electric, up 402% and 87.5% respectively.

More new electric cars are being sold which will filter through to the used car market. Expect this trend to continue in quarter two.

In contrast to all the media reports about credit crunch, rising road tax and fuel prices hitting the most polluting cars, sales of used 4x4s and MPVs remained strong in the first quarter.

However, fuel prices are now starting to bite and sales of SUVs/4x4s – new and used – are expected to take a hit.

Many believe that MPVs will come under pressure as the market shifts back towards estate cars. 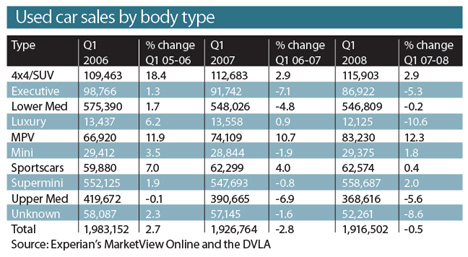 AM Poll
How has the COVID-19 pandemic affected your attitude or mental health? Please leave a comment
Vote
View all
2983