Market trends: Recession, the past is no guide

Departed chairman of Ford, Roelant de Ward said last autumn: “The thing about recessions is that the cards get shuffled.”

What he meant was that buying patterns that have continued steadily for years get reconsidered under the financial pressure of a downturn.

The reason for his philosophical approach was probably that, with the new Fiesta and Ka, Ford of Britain is as well placed going into the slump as anyone.

Certainly, the sales figures for January suggest that things are more fluid than they have been for a long time. In terms of sales growth, the best performance came from Jaguar, which was up 53% on the back of the new XF.

Of more widespread relevance was the fact that the only other manufacturer to increase sales was Hyundai, whose new i-model blitz is now well under way (i10, i20 and i30 are all recent entrants). Its sales were up 5.7%. Its market share was up by a half, from 1.1% to 1.7%.

In this market, success can only really be measured by market share movements, given that the overall market is down by 31%.

On that score, any company that fell by less than that amount must be counted as doing reasonably well in the circumstances.

Many of the better performances are new-model related, although a special mention should be made of Porsche. In 1989-91, Porsche became the symbol of the recession with sales falling from a peak of 3,600 to under 1,000.

This time, Porsche has actually had a smaller-than-average fall thanks to the revised Boxster and Cayman. How long it can continue outperforming the market is another question, but its January performance shows how the company has been utterly transformed since the last downturn.

At the wrong end of the table, the obvious question is how long three Chrysler brands can continue? Even if Chrysler avoids bankruptcy in the US, the range must surely be pared down to a few off-roaders and MPVs in the UK.

When Dodge was relaunched in the UK, my sceptical comments earned the retort from Chrysler that I did not understand its strategy. I freely admit I still don’t. The sales figures also cast doubt over Subaru – the UK may only be a tiny market for it, but it is symptomatic of a global problem.

The appalling “Saabaru” sold in the US (a Subaru Impreza sold with a Saab grille) is starting to look prescient – Subaru is a bit of a Japanese Saab, financially speaking.

As for Renault, it has pretty well everything riding on the new Megane: with the Twingo, Clio and Laguna all having disappointed. This one has to deliver if Renault is going to have much of a future beyond the low-cost Logan. 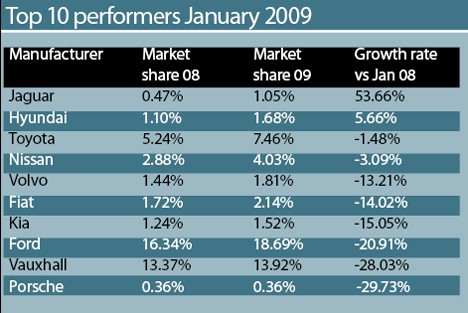 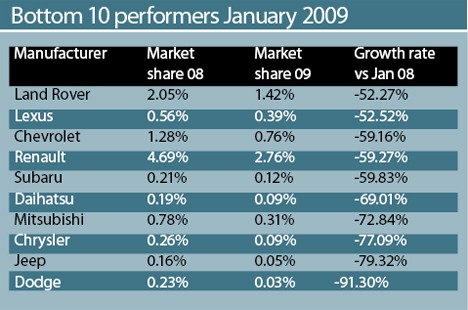