Hodgson Mazda sales are up

Hodgson has revealed that its new Mazda sales at its Silverlink dealership in Newcastle are up from the same period last year. 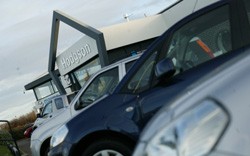 The dealer group says its performance has helped Mazda towards increasing its market share from 2.3% in the first quarter of 2008 to 2.6% in 2009.

While Mazda UK increased overall market share to 2.6% nationally, Hodgson has posted a 4.5% market share in the first quarter of 2009.

“We believe the reasons Hodgson is enjoying an increase is due to a number of factors: the popularity of the new Mazda 2, which is really being embraced by North East buyers is one of them. Most importantly it’s the commitment we show to customer service that ensures we make the sales where other dealerships don’t.

“Customers enjoy dealing with us, they trust they will receive an honest deal and we make the whole experience hassle free. Plus after 50 years in the business they know we’ll still be here at the end of this difficult trading time, stronger than ever.”

Hodgson operates four franchises; Mazda – which it has held for 21 years – Suzuki, Toyota and most recently added Mitsubishi to its group. It is based in The Silverlink with a second Toyota branch in Gateshead. It employs more than 140 staff.