The fact that big cars are losing both market share and sales volume belongs to the department of no surprise.

However, what certainly is surprising is that the off-road segment is growing its market share – and to a record level. So what is going on?

One clue comes from the proportion of models sold with front-wheel drive. This was steady at less than 2% for the whole of this decade – until this year, when it has jumped to 5.1% for the segment as a whole.

Although Land Rover is actually performing reasonably well, being down no more than the market average, the general trend is that the right badge is less important than having the right product.

Even two years ago, it would have been hard to imagine that Ford and VW would make the third and fourth
best-selling models respectively – just think how many failed attempts Ford made over the years with two Mavericks and an Explorer.

Today, the core of the 4x4 market is lower medium hatchbacks on stilts – it is no coincidence that two of the big successes are based on two of the best hatchbacks: the Tiguan on the Golf and the Kuga on the Focus.

In contrast, models from mainstream manufacturers that are not great to drive are taking an absolute hammering.

The Chevrolet Captiva is down 69%, while the combined sales of the Peugeot 4007 and the Citroën C-Crosser are below 1,000 so far this year.

Even premium brands are seeing a shift towards smaller models: Audi Q7 sales are down a whopping 65%, but the smaller Q5 has more than made up the difference.

It is the same story with the Volvo XC90 (down 53%) as
against the XC60. Overall, it seems that people still like the “command” driving position of a 4x4, but want a smaller package which is still decent to drive.

Quite where this will leave the image of off-roaders remains to be seen – will we soon see bumper stickers saying, “Actually, this isn’t a 4x4”? 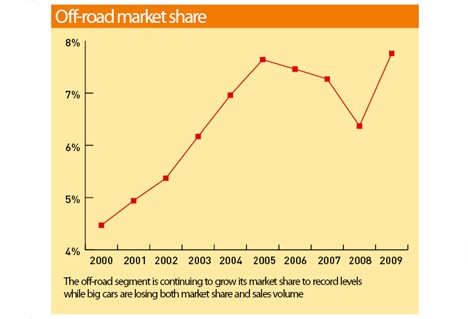