Jaguar has unveiled its new XJ and is inviting its network of dealers to view the car at an event at the Saatchi Gallery in London tomorrow. 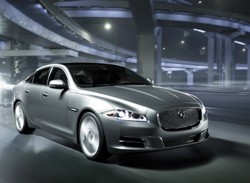 The new XJ is available to order now, with the first customers due to receive their cars in early 2010. Prices start at £52,500 for the standard wheelbase 3.0-litre V6 diesel in the entry level luxury trim.

The new XJ marks the regeneration of the Jaguar brand and tops off its trio of rejuvenated models, including the XK and XF.

Mike O'Driscoll, Jaguar Cars managing director, said: "We’re making Jaguar, Jaguar again. You’ve got to have a good time in a Jaguar and I’ve always said that we’re in the entertainment business, not the transportation business.

“We didn’t want to do just a bigger brother of the XF, we wanted to make something just off centre.”

The design of the rear of the new XJ has provoked a marmite reaction from critics and Jaguar design chief Ian Callum said that it was intentional to create something that would be instantly recognisable as an XJ.

Callum told journalists at the media reveal this morning: “Why have we designed it this way? Because we can. I wanted it to be instantly recognisable.”

Standard- and long-wheelbase models are available from launch. Jaguar is putting a large emphasis in customer choice when it comes to interior specification with a large array of leathers, colours and option packs.

There will be a choice of three engines from launch, including a 5.0-litre V8 in naturally aspirated and supercharged form, but the best seller is expected to tbe the 3.0-litre V6 diesel.