A look at the registrations for June reveals clear evidence that the scrappage incentive scheme has driven up orders.

The 24.77% slump in the new car market recorded in May has been lifted to just a 15.74% drop in June with 176,264 registrations, while retail sector registrations actually increased and took a 49.2% share of that figure.

Sue Robinson, director of the RMIF’s National Franchised Dealers Association, said one positive sign is the return of the private buyer to the new car market, particularly encouraged by the scrappage scheme.

She said that most of the orders taken under the scrappage scheme have yet to translate into registrations.

“We expect the full impact of the scheme to make itself felt from next month onwards,” she added.

To put the whole table in context, it should be remembered that the new car sector had already caught a cold in June 2008, indicated by a 6.14% drop in that month and a 1.56% drop at the 2008 half year point.

This figure should help lift the mood in showrooms across the country, when compared with the 28.5% decline recorded in the first four months of 2009, before the scrappage scheme’s launch on May 18.

Data from the Society of Motor Manufacturers and Traders shows that 9.7% of June’s car registrations were through the scrappage scheme.

If such incremental business can be sustained it should deliver a positive effect to dealers’ cashflow and profitability.

Several manufacturers have already announced their additional incentives will continue into quarter three, but dealers and carmakers must continue to focus on marketing, generating leads and following up every opportunity.

With its i10 supermini available for £5,200 with the scrappage discount, it is little surprise that Hyundai has gained most from scrappage.

SsangYong, not recorded as achieving any scrappage sales, still enjoyed a 136.17% uplift to 111 registrations.

At the volume end, Ford certainly deserves mention for its 4% increase in registrations.

However, a 30.1% registration increase at sister brand Chevrolet will give GMUK something to smile about.

In any case, Vauxhall still looks healthy compared to Renault, which won only a 1.62% share of June’s market due to a 71.84% plummet of registrations. 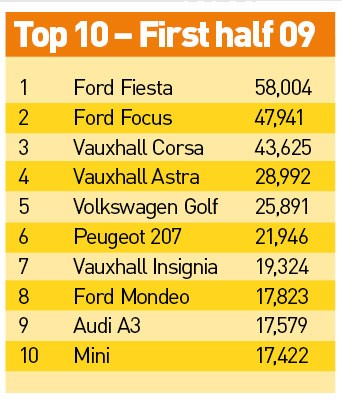