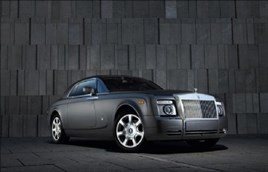 Almost one in four of the 1,573 Rolls-Royce cars registered in the UK is under company ownership

This reinforces the reputation of Rolls-Royce as a symbol of power, luxury and success in the business arena.

Of course, some may be cars registered to hotels or limousine firms.

The brand is clearly a masculine status symbol – of the privately owned cars, only 6.04% belong to women.

Despite the longevity of most Rolls-Royces, which are largely cossetted and restored rather than scrapped, the two most popular models are quite recent products.

London is the place to be for Rolls-Royce service workshops.

More than 15% of the UK parc is based at addresses in capital.

Other hot spots are Birmingham, Portsmouth, Nottingham and Chelmsford, each with more than 2% of the parc, while Redhill, Slough and Leeds come just below 2%.

Nevertheless, these locations still account for only 31.21% of all UK Rolls-Royces.

To power its large, luxury vehicles, Rolls-Royce has always favoured high capacity petrol engines, and the statistics bear this out. Half of the parc has engines greater than 6,750cc, 18.75% have engines up to 5,399cc. The remainder sit between the two.