Ar ecession-beating strategy at Nissan GB is working hard to improve its own performance and that of its franchised network.

The manufacturer has put a clear focus on ensuring its products and dealers are positioned to survive the economic downturn and win new customers from flagging rivals.
In an interview with AM, managing director Paul Willcox said network profitability had improved significantly.

Last year, dealers’ profit margins were averaging 0.4% and there was an “unacceptable” percentage of the network that was making a loss.
This year, profit margins have climbed to between 1.3% and 1.4% “and that’s a growing trend”, said Willcox.

Nissan has crept up the manufacturers’ table, ahead of Citroën and Renault, in terms of market share, and is working to balance out its retail and fleet mix, another strategy that works in dealers’ favour.

Testament to the improvements made by the manufacturer, and the confidence in its current and future product, is the fact that top 10 AM100 dealer Lookers has begun re-investing in the franchise.

Five years ago, Lookers began to trim down its loss-making businesses. Between 2004 and 2007, it cut its partnership down from eight locations to two. However, this year it has added Nissan franchises in Chester and Altrincham alongside its existing Renault outlets.

Although Nissan GB has not been immune from the depressed market that is hurting all mainstream manufacturers’ performance, its sales in 2009 have been outperforming the overall market.

At the half-year point, its new car registrations were down 20.74% compared to the overall 25.85% decline across the industry, and its share of the market had actually increased to 3.38% against 3.16% in the first half of 2008.

A solid sales performance in July has boosted Nissan further. Its year-to-date registrations now stand 12.62% down on the corresponding period in 2008, and it has grown market share to 3.57% against 3.15%.

Much of its growth is due to the success of its C-segment crossover model, the Qashqai. Willcox said it had achieved growth every single month since launch, and is now consistently winning 5% of its segment.

Most customers are moving to the car from other brands, with compact MPVs a typical trade-in. Qashqai is significantly outselling its predecessor, the Almera. In 2005, when the total market numbered 2.4 million units, Almera achieved 15,514 registrations. By comparison, Qashqai registrations numbered 20,240 last year in a total market of 2.1 million units.

The C-segment model was Nissan GB’s second highest-selling car after Note, and ahead of Micra. So far this year, that pattern is being repeated.

It is also beginning to compete in the A-segment, a vital market in this recession. Its India-built Pixo, essentially a rebranded Suzuki Alto, was launched in July, priced from £6,995. First-month sales totalled 700 units.

One weak spot in the market is the D-segment. In such a competitive fleet-driven arena, Nissan’s distinctly styled Primera struggled against mainstream rivals and was withdrawn from the UK at the end of 2006. It had managed fewer than 4,000 registrations that year and 8,106 in 2005.

For Nissan GB, the aim is to hold its market share at around 3.5% this year, before pushing for a 4% share from 2010. The growth will be driven by new product, with multiple launches in the A-segment, B-segment and sports car segment in the immediate future. 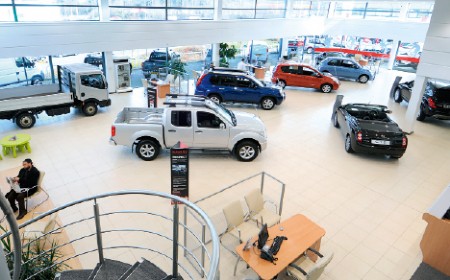 These will be joined in the medium term by an electric-powered car, the Leaf. The Japanese brand is also developing its own hybrid powertrains, but no decision has been made yet on whether these will come into Europe.

In total, Nissan GB will introduce 13 new or revised models into the car and LCV markets before the end of 2012.
Dealer challenges The raft of product will not mean that Nissan dealers will have it easy. Willcox expects the network to raise
its game in order to drive these future products into the marketplace.

Last year he ordered a diagnostic evaluation of every Nissan dealership in the UK. It measured dealerships against KPIs on profitability, CSI, sales and aftersales.

The analysis identified a split in the network: 60% were hitting every KPI, 20% were not, due to reasons such as being young partnerships. The final 20% were simply under-performing.
It has now issued notices of termination to 15 of its 185 dealerships. The message is a simple one – address the issues or leave the network.

Willcox said all the businesses under notice had 12 months to improve or they would be replaced.

“All say they will work to improve, but some of our partners will not be able to address their issues,” he added. At the same time as the network review, Nissan GB began to rationalise its retailer programmes with the aim of making the franchise easier for its partners to manage.

In last summer’s dealer attitude survey by the National Franchised Dealers Association, Nissan was rated average for its bonus incentives and below average for its new car targets.

As a result, the carmaker simplified its margin structure. Now dealers have a fixed trading margin, quality margin and a retail share bonus, and the held-back element is paid quarterly rather than half-yearly.

This article is available in full in the 28th Aug 09 AM Magazine - including a profile of Harratts dealergroup, how the scrappage scheme is effecting Nissan, future launches from Nissan and their plans to provide the first 'affordable' zero-emission car.

AM Magazine provide regular Insight articles looking at Manufacturer Networks and Dealergroups - to sign up for your magazine please click on the following link to subscribe:

AM also provide a montly electronic magazie called the AMe - this provides the latest analysis of new car sales figures each month - to subscribe for this eZine please click the following link: