Lotus dealers will be required to invest at least £1m in revitalised dealerships in order to move forward with the ambitious British sports car brand.

Lotus Cars has revealed plans for five new models by 2015 which, it says, will re-establish it as a global supercar brand.

The launches include a new Esprit two-seater and a four-seater Eterne, both of which will retail for more than £100,000 and which will court customers familiar with Porsche and Aston Martin levels of customer service.

Currently all 21 Lotus franchised dealerships in the UK are under termination.

New contracts will be signed by July 2012, however Lotus admits some retailers will not be willing to make the minimum £1m investment to meet its new franchise standards.

Chief commercial officer Andreas Prillmann exclusively told AM this morning at the Paris Motor Show: "There are some dealers who won't make the investment or who can't make it. 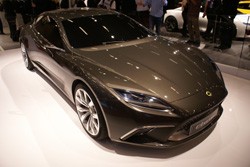 "I think they will voluntarily look for different opportunities. It's not their world, in the prestige sector."

"But we have some dealers already with other premium brands who will understand what we ask for. It's not over the top but it is how best to serve the customer."

Lotus wants a UK network of 10 to 12 dealers in or near major cities, supported by more authorised repairer sites.

For more of this story, see AM magazine on October 22.