Landwind’s CV9 has been awarded two stars by Euro NCAP for safety. 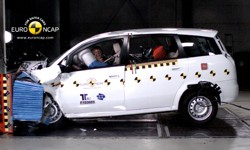 After an unsuccessful first introduction onto the European market in 2005, Landwind would have been eager to erase its poor safety record.

The Chinese manufacturer said the car had been revamped “to meet the strictest European safety standards”.

Euro NCAP stated: “The car remains poorly equipped, lacking a side protection airbag, a head protection device and electronic stability control. The car was limited to a two star rating by its overall performance although it came close to meeting the three star threshold for adult occupant protection.”

Dr Michiel van Ratingen, Euro NCAP’s secretary general, said: “It is clear that vehicles from China, India and other emerging countries will in the next few years become commonplace on European roads.

“Euro NCAP will ensure that consumers know what levels of safety are offered by these vehicles.

"By highlighting differences in safety performance, we aim to drive the safety of all cars towards and beyond the high levels we see from more well-established manufacturers. We are confident that Landwind and others will rise to this challenge.”