There are encouraging signs in the used car market reports Manheim. After three months of declines, retail used car sales were up quite significantly in July by 2.3 units to 14.3.

Such unusually strong performance was derived from much busier web-sites and showrooms, with combined online and showroom used car traffic figures up 9.1 enquiries to 41.4. All individual used vehicle segments saw an increase in sales in July over June with the exception of small hatchbacks which remained pretty static. After recent very high conversion rates, July’s conversions slipped back slightly, down 2.6% on June.

So are these used car sales figures the green shoots of recovery or a last hurrah before a double-dip?

John Simpson, Manheim Retail Services managing director, said: “The market is likely to be challenging to say the least. The seasonally quieter August holiday period will precede an autumn that will be dominated by the spectre of the Government’s spending review.

“The massive cuts that are likely to be announced could well have direct implications for that all-important consumer confidence.”

All vehicle segments saw drops with the small hatchback segment showing the greatest fall.
“Conversion rates for stock for retail remained at 77% in July, suggesting that vendors are pricing vehicles in accordance with this weakening market. Good quality ‘clean’ stock is still finding ready buyers, but anything that requires too much effort to get it onto the forecourt is being overlooked,” he said. 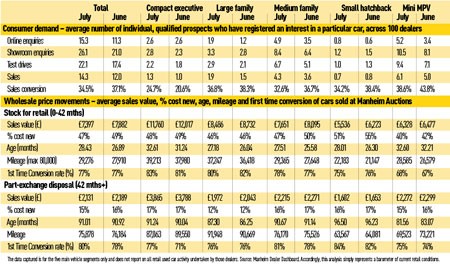