Throughout the summer BP’s Deepwater Horizon disaster remained in the headlines as millions of gallons of crude oil gushed into the Gulf of Mexico.

It underlined the importance of controlling oil, whether in its original state or after refinement. Without its lubrication engines would not work, but oil is messy and, in franchised dealerships, has a habit of disappearing without trace.

Lubricants ‘wastage’ is typically regarded as referring to oil taken into a dealership, but not charged out. This includes oil that is spilt, lost through leakage, mischarged, stolen, used in demonstrators and/or transferred between departments without having been recorded.

For too long franchised dealers and independent garages have tended to take a casual attitude to managing the flow of oil in and out of their premises. It has now been shown that six in 10 managers at dealerships do not take the trouble to find out how much of it is wasted.

This emerged from new research by Castrol Professional, which revealed that slipshod attitudes are costing motor retailers dearly. It was also proof that many of those running aftersales were taking a casual attitude towards the disposal of waste oil.

Castrol Professional, which is part of BP, said the majority of franchised dealers never measure their oil wastage. Nearly half of them have no system in place to monitor day-to-day oil usage.

The majority of lubricants are wasted due to poor reporting of usage across departments, added a report by Castrol, whose Matrix fluid management system was designed to make monitoring easier and improve oil profitability.

The latest findings are part of Castrol’s continuing research project into workshop management and oil usage at franchised dealerships.

The company claims that this is a groundbreaking move to assist motor retailers, and provides evidence to suggest that dealers should take note of the findings.

Castrol estimates that failure to keep a grip on oil waste is costing franchised networks around £50 million a year, which equates to 11% of motor oils profit going down the drain. In an average dealership this equates to an annual loss in profits of about £1,450 per technician.

Andrew Bosworth, Castrol Professional equipment services manager, said: “It is alarming that so few aftersales department decision-makers monitor oil usage. Only by regularly assessing the sources and degree of oil wastage in their business can dealers take steps to reduce it.”

Bosworth might be stating the obvious, but it’s clear too many motor retailers fail to do the obvious, which is surprising given the need to raise revenue and cut waste in dealerships. 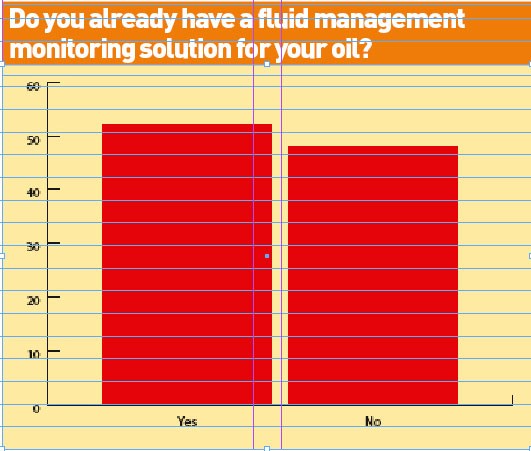 The majority of franchised dealers, said the Castrol report, could significantly increase the profitability of their aftersales operations overnight by making more effective use of oil measurement systems.

The study examined attitudes to keeping tabs on what happens to fresh and used motor oil among aftersales department decision makers – those directly responsible for purchasing and accounting for oil in their business.

This revealed that 58% of them have never measured their lubricants wastage. In addition, virtually half (48%) have no form of oil measurement system in place.

Castrol Professional found that 40% of dealerships monitoring their oil wastage believe topping-up customer cars and demonstrator vehicles is the primary source of wastage. Inaccurate measurement was identified as the next biggest cause, according to 17% of respondents.

A Castrol Professional spokesman said: “We want to better assist aftersales department managers in monitoring oil usage within their business.

“Our equipment services team found that dealerships taking part in this year’s field trials of our Matrix fluid management system saw oil profits rise by up to 22%.”

Castrol can retrofit the Matrix system to a dealership oil storage tank without a need to cut pipes and with relatively little disruption to business in an aftersales department.

To dispense any oil, technicians must first enter a code number into the key pad on the dispenser nozzle. The oil is tracked on an electronic reporting suite, allowing managers to keep a close watch on usage in different parts of the dealership.

Castrol’s equipment services team is working with a number of dealers who have dramatically cut oil wastage by installing accurate fluid management systems. Because this directly benefits aftersales department profitability the team wants to gain from their experience, which can be used to assist future dealers adopting the Matrix system. 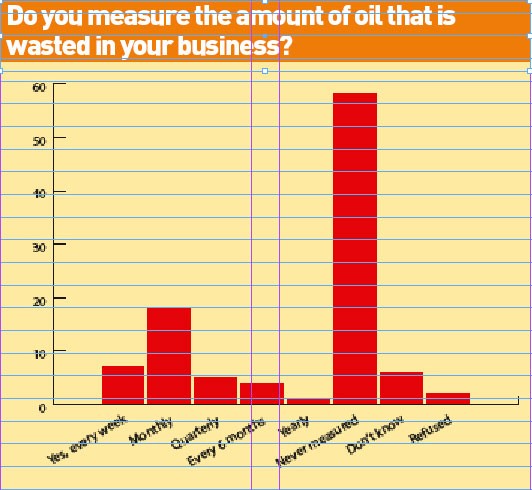 Further findings from Castrol Professional’s oil usage survey will be announced in stages until the end of the year. The project involves phone interviews with over 250 senior dealership decision- makers.

Castrol wants more dealers to be aware of the money they could be saving and has placed material from its research on its new website, www.castrolprofessional.co.uk.
This includes video comments from dealers who have taken positive steps to improve the efficiency and profit-ability of their aftersales operations.

Oil flow within some dealerships is already closely monitored. Nick Jaye, aftersales manager at Berkeley Vale Motors, of Bristol, said: “I believe that engine oil dispensing should be done through metered outlets and closely monitored via the parts department.

“I know a lot of dealers with service departments looking after oils, but I believe a better result is achieved through giving the parts manager the responsibility.”

Jaye said many workshops place oil dispensers on the shop floor, but leave it to the technicians to tell the parts department they had used some.

“I have a very keen parts manager who doesn’t miss a trick,” he said. “He is always around the workshop and monitors jobs so hardly ever misses a drop of oil being issued.”

Berkeley Vale runs two grades of oil to suit all cars and has no problem with wastage, said Jaye. The main engine oil used, one of the latest synthetics, is stored in bulk, and the oil to suit older cars is stored in a 209-litre barrel in the workshop.

“We have very little wastage and never end up writing off oil to get the books to balance at stock-take,” said Jaye. “We also run a perpetual stock-take process so things get identified more quickly and easily.

“I think the key is having a vigilant parts manager and looking after the technicians when they want some engine oil so that it doesn’t end up disappearing.”

Ian Sabin, service manager at Citroën Birmingham, said: “We use a very old fashioned way of vending lubricants, but hope to move to a state-of-the-art delivery system in the near future.

“To maximise oil sales and to reduce oil wastage to virtually zero, an electronic delivery system linked directly to a garage’s dealer management system (DMS) is an absolute must,” he said.

Pat Harvey, Benfield Motor Group’s aftersales development manager, said: “We try hard to keep a tight control on motor oil. It’s like liquid gold, especially when you are handling full synthetics. We don’t like to throw money away.

“Systems that measure the movement of oil are expensive and potential savings through wastage have to be measured against the investment needed.” 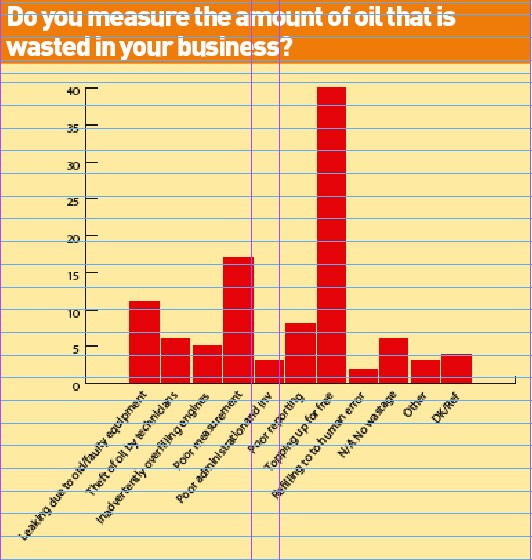 Dealer attitudes to motor oil management are improving, says Mobil 1 marketing manager Joanne Mitchell, who urges them to use sensor systems with electronic gates on tanks.

“It is important for dealers to have the knowledge they need so that they don’t under or over order,” said Mitchell. “Technology is improving so that oil tanks should never be close to full or zero. On many occasions dealers find they are about to run out and try to place an emergency order.”

She said Mobil has a range of disciplines to help dealers. “Tanker drivers have to sign a document before delivering oil into a particular tank,” said Mitchell. “This is to avoid a driver trying to pump oil into a full tank or one that holds a different type of oil. Mistakes can be messy and expensive.”

“Some car manufacturers have engines that need a wide variety of types of oil. Then the cost of buying and storing it becomes an issue,” she said. “So we offer oils in a range of packs, from large to small, and with dispensers where necessary.”

Millers Oils may introduce a service for dealers by collecting waste engine oil that can be recycled for use in hydraulics systems, which require a lower level of refinement.

At the end of 2008 Millers acquired Falcon Lubricants, which has a waste oil facility. Dave Mott, Millers Oils key automotive account manager, said: “We are not offering this yet, but we’re looking into it. This may be a service we offer to dealers who often have to pay a considerable amount for disposal.”

Many of the larger oil companies can provide oil disposal as part of the overall service. Millers Oils believes this is something that is set to increase due to environmental standards.

“Our objective with handling waste oil would be to add value through
recycling. This is something that the green lobby is encouraging the oil and all industries to try to achieve,” said Mott.

Cambria Group is profitable, mainly because it is always looking for ways to increase revenue and reduce waste in all aspects of the business.

At the end of last year, senior managers went through financial reports relating to motor oil. They did not like what they found and decided to take action.

Jamie Steel, aftersales manager at Cambria Group’s Swindon Motor Park, which holds Seat and Citroën franchises, said: “After investigation, it was identified that the business was losing a significant proportion of the potential profit from oils. This was either through shrinkage, spillage or just inaccurate reporting on job cards.

“Those odd quarter- and half-litres of oil put into customer or demonstrator cars weren’t being accurately reported on job cards. When added together they represented a sizeable hole in the potential profits of the business.”

Cambria consulted oil supplier Castrol Professional and implemented its Matrix oil management system to track every litre of oil leaving the aftersales operation. “We soon began to see substantial benefits from implementing the system, which has generated a significant amount of additional profit,” said Steel. “One reason for the success of the Matrix system is that it is designed to be easy to use.”

Matrix software enables aftersales managers to track which technicians have used the system and also when and what they were dispensing. Reports generated by the system can indicate total daily or weekly usage or individual usage by technician.

Steel said: “They help managers to accurately identify any areas for improvement so they can act before the monthly reports are in. Our customers have responded positively because the job card includes the precise fill amount. They can see they are only paying for the amount they’ve been supplied with.”