Europe’s new car market continues to struggle with a continued fall in sales which has resulted in a market decline of 2.4% year-to-date.

Auto intelligence provider JATO Dynamics says the Volkswagen Polo and Renault Mégane are the only two models amongst the top 10 best-selling cars which continue to increase their sales both year-to-date and in August.

The Golf has suffered a particularly strong reversal of fortune which has seen its sales drop by 29.3% in August, making its sales decline one of the largest among the top sellers.

David Di Girolamo, head of JATO Consult, said: “This month we have seen a continuation of the sales drop that can in part be apportioned to the removal of scrappage incentives in certain key markets.

"Generally, consumer confidence seems to be taking another dip, and this contrasts to the general feeling of growing optimism that prevailed earlier in the year.

Brand performance
Renault continues to see growth, with year-to-date sales up by 15.7%, thanks to strong sales for both the Clio and the Mégane.

This growth has seen it replace Opel/Vauxhall in the top three over the last 12 months.

Peugeot has also found a place nearer the top of table.

The fact that the two French manufacturers both specialise in small cars, has helped benefit them during harder economic times.

Volkswagen still tops the charts, but with Golf sales in decline, its year-to-date figures are down 3.9%.

Ford rounds off the top three places, down 8.7%.

The only top 10 brand to have posted sales growth for the month of August is Audi, with a small increase of 1.4%, although that has not been quite enough to bring a positive effect on its overall 2010 figures, which sit a marginal 0.4% below 2009.

Year-to-date, four of the top ten best-selling models in Europe have managed to cling on to sales growth.

Europe’s ‘big five’ markets of Great Britain, Germany, Spain, France and Italy are all down for the month of August, a volume related factor which is instrumental in dictating the overall sales figures for Europe.

Many markets, with comparatively low volumes, have been performing very well both in August and year-to-date.

The Nordic countries, Portugal and Eastern European markets are all doing particularly well at present.

"The sales decline seen in the big five markets is by no means true of all of Western Europe, and Germany’s sales decline does contrast with its comparatively strong overall economy.

"Compared to 2009 year-to-date, we are only 2.4% down so the next four months will be fascinating to observe, but it’s difficult to foresee any major improvement in the short term.” 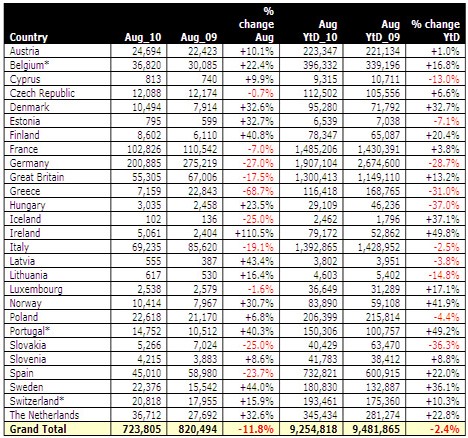